Welcome to another episode of the Blockchain Report with Taylor Niklai. 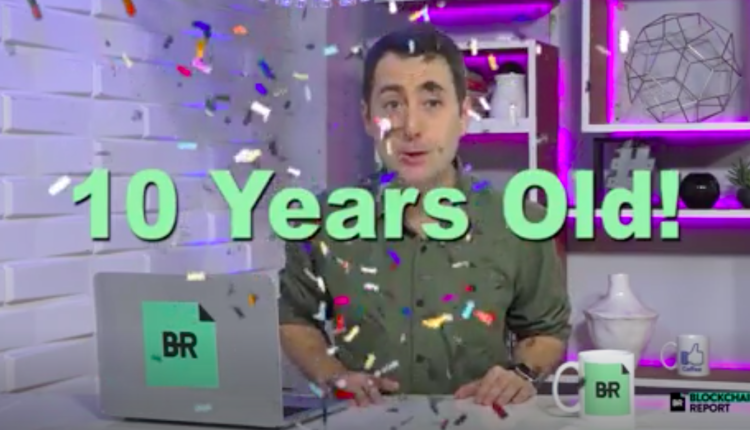 Welcome to The Blockchain Report, your daily rundown for the latest in crypto with your host Taylor Nikolai. First up: Bitcoin turned 10 years old this week!

According to Business Insider, Bitcoin has turned 10 years old. 10 years ago, a person by the name of Satoshi Nakamoto published a nine page paper that describes Bitcoin. This paper would ultimately lead to the creation of Bitcoin and the first Bitcoin transaction in early 2009. So how did we get to where we are today?

On May 22, 2010 a man purchased two Papa John’s pizza. This is what many consider to be the first Bitcoin transaction for a physical good. In the transaction, 10,000 Bitcoins were traded for two pizzas. Those 10,000 Bitcoins would now be worth $63 million. Whoops!

Bitcoin first reached the mainstream in late 2013, when Bitcoin spiked from $100 to $1,000 in only a month. This spike caused the media to begin talking about Bitcoin. Joe Weisenthal, a writer at Business Insider, decided to write an article “I’m Changing My Mind About Bitcoin”. The price then proceeded to decline until 2017.

The price of Bitcoin then re-inflated in 2017, in which Bitcoin “forked” and the price saw another massive increase. That brings us to about today. No one exactly knows what’s next.

Next up, 25% of affluent millennials hold cryptocurrency.

Edelman’s Global Chair of Financial Services, Deidre Campbell, isn’t surprised by these numbers. Campbell said: “Anyone that has crypto tells me they wish they bought it sooner… It’s not inherently that [millennials are] riskier. But rather, better supported with savings. So they’re open to different opportunities”

Another interesting insight from the report showed that millennials are wary of the financial system. 75% of affluent millennials believe it’s only “a matter of time” before another recession occurs.

Next up, a massive e-commerce company has launched a blockchain research lab.

According to NewsBTC, China’s largest ecommerce company JD.com has decided to collaborate with the New Jersey Institute of Technology Ying Wu College of Computing. These two organizations are joined together with the Institute of Software at the Chinese Academy of Sciences. Together, these organizations will form a blockchain technology lab. The aim of the lab is to solve efficiency problems and discover new applications for blockchain.

JD wants to focus its efforts on researching consensus protocols, privacy protections, and security in decentralized applications. The deputy director of the ISCAS, Zhong Hua, has stated, “through this partnership we will bring about blockchain innovation and promote industrial applications of blockchain technology.”

Next up, Jamie Dimon doesn’t give a shit about Bitcoin. Jamie Dimon (who is the CEO and chairman of JPMorgan Chase & Co) spoke at an Axios conference in Los Angeles where he expressed his distaste. See, Jamie Dimon inadvertently became a main voice against Bitcoin when he said in 2014 that it was a “terrible store of value” and in 2017 when he said it would not survive, claiming it was a fraud.

And finally on today’s show, India is considering outlawing crypto. According to TheNextWeb, after a meeting of the Financial Stability and Development Council, India is seriously considering taking measures to outright make crypto illegal. They DO like distributed ledger tech though. That’s okay.

The meeting notes said: “FSDC took note of the developments regarding [the] strengthening of Cyber Security in [the] Financial Sector including progress made towards setting up of a Computer Emergency Response Team in the Financial Sector under a Statutory Framework,”