Today on the show: Tron will be investing $100 Million in Blockchain Games. What this means and more, below. 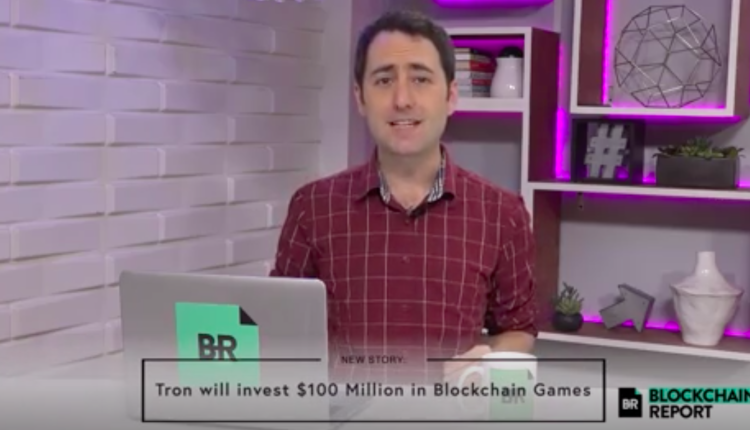 Welcome to The Blockchain Report, your daily rundown for the latest in crypto, with your host, Taylor Nikolai. Today on the show: Tron will be investing $100 Million in Blockchain Games.

According to Venturebeat, Tron said that it will invest $100 million in blockchain games over the span of the next three years. The purpose of this investment is to increase the amount of innovation in emerging technologies. Roy Liu, head of business development at Tron, said: “Our mission is to bring the blockchain to mass market…Games led the way to make smartphones and virtual reality more accessible. Now it’s happening with blockchain.”

Liu also said that the gaming market is always expanding, and has been doing so since 2007 when the first iPhone was released. Liu said that blockchain technology will disrupt the gaming industry due to blockchain providing a transparent and secure way to store data.

Here’s what Tron’s founder Justin Sun had to say about the $100 million investment pledge: “Through establishing the blockchain game fund, Tron hopes to tackle with the inherent problems in the gaming area using the decentralization, openness, transparency, and immutability features of blockchain. As a result, players around the world can get the best blockchain gaming experience, and blockchain technologies can be spread.”

Next up, a cryptocurrency startup CEO could face 120 years in prison for a $4 Million scam.

According to The Next Web, Jared Rice, the CEO of the blockchain startup AriseBank, could face up to 120 years in prison due to scamming investors out of $4 million. As part of his Initial Coin Offering (ICO), Rice promised his investors that the cryptocurrency would be able to achieve Visa-like functionality. Instead of using the funds raised from the ICO to develop the cryptocurrency, Rice decided to do something else with the funds: pay for expensive hotels, food, and clothes.

There were several other red flags with the AriseBank ICO. Rice claimed that AriseBank raised $600 million in the span of a few weeks. However, the ICO only raised $4 million. Furthermore, Rice had previously disclosed guilty to state felony charges in relation to another internet business he was involved in.
More from this, maybe at 0:31 https://www.youtube.com/watch?v=q3kh5n_lsL0

According to Ethereum World News, 98,776,172 Binance Coin (BNB) was transferred out of Binance to an unknown and unverified wallet. What is particularly notable about this transaction is both the size, as well as the fee paid to complete the transaction. These coins were worth $512 million in total. This transaction was completed for a fee of only $0.03, in the span of several minutes.

Some people were worried that a hacker was stealing the Binance coins from Binance’s wallet into their own personal wallet. However, the CEO of Binance Changpeng Zhao went on to Twitter to quell people’s fears, stating that the massive move of these coins is related to increasing security for their customers:
Clip: https://www.youtube.com/watch?v=cLlQwJTw_oI

“Nothing to worry about. Check the tx logs, plenty of tx FROM the new address TO our old wallets. No need to spread FUD. We are constantly working on beefing up our security even more.”

hanks for watching The Blockchain Report. If you want to stay up to date on all the latest crypto news and trends, be sure to follow us on Instagram, @BlockchainReport. We’ll see you tomorrow.