BlockChain Report 12/6/18: Whales are Buying Ethereum and What Is Substratum? 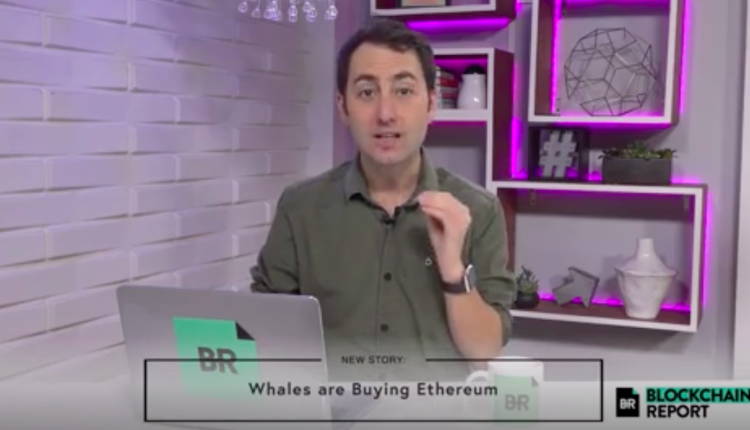 Welcome to The Blockchain Report, your daily rundown for the latest in crypto, with your host Taylor Nikolai. Today: whale are accumulating Ethereum!

This information is based on research done by the Blockchain research group Diar. Diar analyzed over 5,200 Ethereum addresses and discovered that cryptocurrency whales who trade regularly have 80% more Ethereum than at the beginning of the year. These whales own 20% of the Ethereum supply, which is a four-fold increase on Ethereum held by whales since January 2017.

Although the total number of Ethereum these whales own has gone up since the beginning of the year, the value of these holdings in U.S. dollars has dropped significantly. At the start of the year, their holdings were worth $21 billion. Now, those same holdings are worth only $2.4 billion, an 89% drop.

Next up, the Blockchain Project Conflux raised $35 Million. According to Fortune, a new blockchain protocol called Conflux has raised $35 million from Sequoia China and other Chinese internet companies. Conflux claims that it is able to overcome a limitation that is found in other existing blockchain technologies.

Conflux claims that its system allows for multiple blocks to be added at the same time to the chain, without forking. This prevents any given organization from controlling the blockchain. One of the people working on Conflux is Andrew Yao, who is known as China’s “godfather of computer science”.

Another co-founder on the project is Fan Long, a University of Toronto professor. A Conflux press release claims that the platform is able to reach 6,500 transactions per second.

And finally on today’s show, South Korea might begin to tax cryptocurrencies.

Hong Nam-Ki was quoted as saying: “A task force consisting of experts from relevant government agencies including the National Tax Service and the private sector will be formed to examine overseas examples and hammer out the taxation plan.” However, Nam-Ki also stated that South Korea should be cautious when it comes to regulating the cryptocurrency industry.

Instead, he argued that regulation should be created that will nurture the cryptocurrency industry while weeding out fraudulent companies and organizations.

Thanks for watching The Blockchain Report, with your host Taylor Nikolai. If you want to stay up to date on all the latest crypto news and trends, be sure to follow us on Instagram, @BlockchainReport, and check out our video regarding Substratum — and how its goal is to make a decentralized web! Check the video out below!