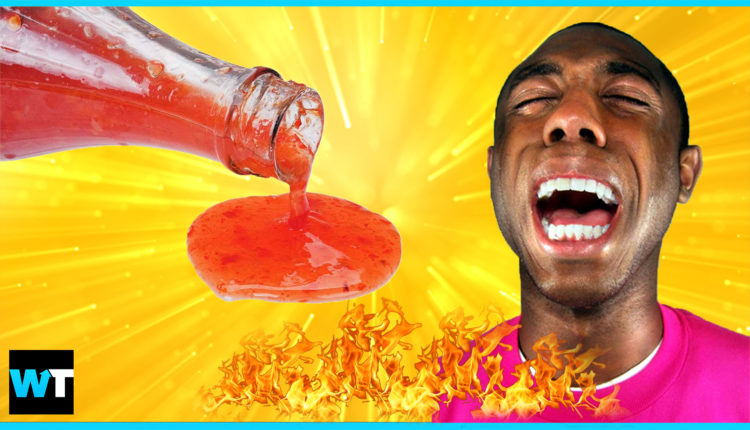 Anne-Marie Richardson and boyfriend Doug Bartlett had a few drinks at a chili festival and were feeling frisky when they got home. Anne-Marie reached in her bag for lube but grabbed a bottle of hot sauce by mistake.

And you can probably see where this is going.

According to The Sun, she “poured it all over his manhood and carried on doing what I was doing with my hand. After about 10 seconds, he started SCREAMING. I still hadn’t clocked my mistake at this point, and he jumped off the kitchen table writhing in pain.”

And since the capsaicin impacts neurons and not just taste buds, it can make you feel like you’re burning everywhere. And the story isn’t over yet.

Doug apparently tripped over a shoe and knocked himself out cold. Anne Marie then laid Doug down and put his penis in a cup of yogurt to cool it down.

The Sun talked to Anne-Marie, and other people with similar stories, because sex-related injuries are apparently much more common than you would think. A survey in the UK found that one-third of people have had a sex related injury, and five percent have actually missed work because of it.

A majority of these injuries came when couples were having sex in non-traditional locations. Like on the stairs, a kitchen counter, or on the track during a horse race. Of course, not all sex injuries are as hilarious as Doug’s.

Most of them are things like pulled muscles or carpet burns. But we wanted to see if other people had experienced the uncommon pain of Hot Sauce in the Penis. And it turns out – they definitely have.

It happens quite frequently any time a man (or woman) cooks something spicy and then decides to pleasure themselves without washing their hands first. Any lingering jalapeño or habanero on your fingers is not going to feel very pleasant when it gets…down there. So look – the point of this all is: Be careful out there. Wash your hands. Take care of each other. Don’t pour hot sauce on your penis.

Have you ever had an unfortunate sexual mishap? Let us know in the comments or on Twitter at @WhatsTrending

https://youtu.be/ZSz1sR9b3moThe What's Trending team discusses the events of the week and their…