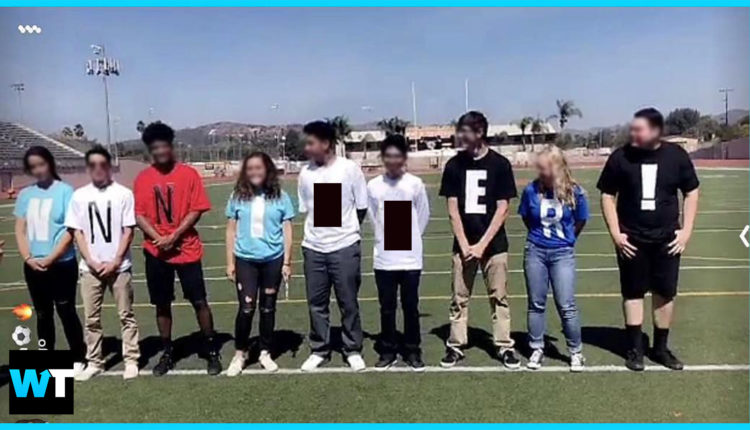 A racist photo taken at Escondido High School near San Diego and shared on social media has gotten students in deep trouble and energized the local community.

Every year, Escondido High School hosts a senior picnic, and at the event seniors wear shirts with letters on them to spell out messages for class photos. Those messages are likely positive things like “Cooperation, Ownership, Understanding.”

But after the event ended, 10 students stayed and filmed themselves spelling out a word. Probably the worst word they could have chosen to spell in that situation — the n-word. They also had three N’s in the word, which means more students wanted to get in on this thing than they had room for.

The students shared the video with each other on Snapchat, but when former Escondido High student Cade Pannell saw it, he took a screenshot and posted it online.

He wrote: “This gets me so fucking heated this shit is not funny and should not be taken as a joke. straight bullshit, esco fucked.” Comments on his Instagram immediately condemned the students and called for them to be punished.

They are. People who know the students say they’ve been suspended, kicked out of sports they participate in, and will not be able to walk at graduation. Escondido High has also released multiple statements addressing the issue.

Another photo was taken of four students spelling out a derogatory word for members of the LGBT community. It’s unclear whether these students are also facing the same punishments, as the other photo was getting the most attention.

One of the students in the photo spoke with the Free Hugs Project, apologizing for her actions and vowing to be a voice for equality in the future. She also said the photo was a result of peer pressure, kids grabbing other kids with certain letters and just putting them together, and everyone thinking it was just a great idea.

Despite the scandal, many Escondido students say racism isn’t a problem at their school and that the incident is isolated. However, the student who went on Free Hugs Project said it was a joke that seniors had participated in in previous years as well.

How do you guys think the students in the photo should be punished? Should it affect their college admissions if they apologize? Let us know what you think in the comments or on Twitter at @WhatsTrending.

VIDEO: Is The UPROAR CHALLENGE As Big As In My Feelings?!