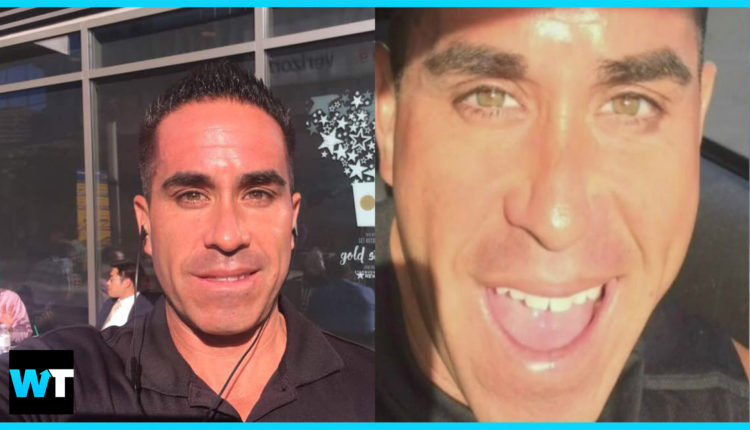 A man who “dine-and-dashed” and stuck over 8 women with restaurant bills has been arrested and could go to jail.

Paul Gonzales has been dubbed the “Serial Dine-and-Dasher” and he’s now been charged with 10 felony counts, including extortion and grand theft.

If convicted, he faces up to 13 years in prison.

Gonzales has apparently been pulling this scam since at least 2016. He would meet women at restaurants, order expensive meals, and then disappear when the check came. Some of these women said Gonzales had sometimes even already eaten when they arrived, and then ordered more.

The women all met Gonzales online, where he’d send them this photo of “his” body. Wait, that’s my – you mean this guy was catfishing women with my body? The fuck, man!

Gonzales’s dates would end up footing the entire bill once he disappeared – in one case, up to $250.Fortunately, some of the managers saw what was going on, and ate the cost of the check. However, some of the victims just paid for the whole meal on their own and left.

The Los Angeles media has been on to this guy for awhile. Inside Edition even confronted him on the streets of Pasadena back in May. Outlets have interviewed several of the women he scammed, though as you’d imagine, not all of them wanted to be identified on camera.

I’d hope that exposing him as a serial grifter would be of some comfort to the victims. Because that solidifies it as his bizarre psychosis and not anything that you did on the date. Now, even though only 8 women are listed in the state’s lawsuit against Gonzales, Inside Edition says they spoke to 20 women who allege he duped them into paying for their meals, which means there are probably more out there.

The great thing is the media attention, in this case, probably helped catch the guy. This story ramped up after a restaurant manager recognized him. This dude apparently lives with his mother and was pulling dine-and-dash scams down the street from his house.

He must have thought he was never going to get caught. Otherwise, he might have gone to restaurants more than a couple miles from his house.

C’mon, brah, rent a Bird scooter. Get your ass to the Chili’s in Encino.

They’ve got Smokehouse Combo’s, 3 for 10 specials. That way, when you split and leave your date with the check, she’ll at least get a deal out of it. This feels really good for the victims who get to see this doofus go down. One victim said “He doesn’t have to worry about any meals now; he’s gonna get three square meals a day.”

In prison is the implication there. So let’s talk about prison real quick.

What this guy did is not the noblest thing in the world, sure. But facing 13 years in state prison? -I think: Make him pay the money back – have him wash dishes at Smitty’s in Pasadena for a few weeks. Ban him from Plenty of Fish and Tinder – or make him label his account as “Hungry Dude Who Won’t Pay For Shit”, and sure, throw a couple weeks in jail in there for good measure.

But 13 years? If he serves that, he’ll be 58 by the time he gets out and eligible for the IHOP Senior Breakfast Menu. That’s gonna make him one hell of a cheap date.

What do you guys think? Should Paul Gonzales go to jail for his scummy dine-and-dash scam? Let us know in the comments or on Twitter at @WhatsTrending.