Six Flags is offering people season tickets and $300 if they can spend 30 straight hours in a coffin at one of their theme parks. 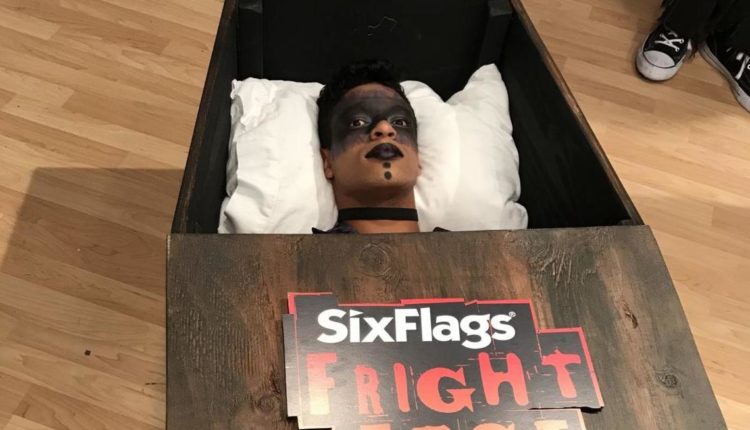 Six Flags is offering people season tickets and $300 if they can spend 30 hours in a coffin.

It’s the 30th Anniversary of Six Flags’ Fright Fest, the annual ritual where the amusement park gets turned into a series of creepy haunted houses. It’s like any other Six Flags experience except the couple in front of you will be screaming at a stranger dressed as a zombie instead of making out uncomfortably in line for Viper.

But for the 30th anniversary, the company is doing a special promotion. A contest where individuals around the country will compete to spend 30 hours straight in a coffin in the park. They’re calling the Coffin Challenge, and the winner will receive: $300 cash and a $500 voucher from Mattress Direct for a new mattress.

Six Flags launched this contest in St. Louis and so many people signed up that they’ve expanded it to every park across the country. Now, everyone who participates, even if they quit after five minutes, will receive two 2019 Gold Season passes and a special Fright Fest package.

So there is an incentive to sign up even if you don’t want to spend any time whatsoever in what Six Flags describes as a “slightly-used” coffin.

How is a coffin slightly-used? I don’t think you can AirBnb those things.

So here’s how it works. Participants will lay in a 2-foot by 7-foot coffin with the lid on up to the chest. You get one six-minute bathroom break every hour. You’ll eat your meals in a coffin, and you’ll be able to have your phone on you.

Oh, that’s not so bad. Plus, you get to have visitors during park hours.

But things get a little different after closing. They’re going to make people stay in goblin makeup all night to be providers of sleep deprivation. Unfortunately, signups for the Six Flags Coffin Challenge are already closed, but if you’re interested, this is a thing people have tried on their own before.

YouTuber Kill’em spent the night in a coffin buried underground with only a pipe to bring in fresh oxygen, but his biggest issue seemed to be that he couldn’t reach the wifi to play an online game. He did ask to be let out only 30 minutes from when he was scheduled to be done.

But, of course, he was locked inside a coffin and buried underground, which is a lot different than being able to sit up and go to the bathroom. My point is: I don’t think Six Flags is torturing people enough with this promotion.

If you really want to do this right, build a big coffin and make the guy who dresses up like Bugs Bunny get in there with the contestant. And before he started posting conversations with social media stars, Shane Dawson and his friends did a coffin challenge as well. It seems like the lid being down really makes a big difference.

Honestly, I think the 30 Hours thing is the toughest part of this challenge. The coffin part, where your head’s exposed and you can still sit up, doesn’t seem that bad. The Coffin Challenges are taking place at Six Flags throughout the second half of the month of October.

Do you think you could spend 30 hours in a coffin for 3 sweet hundies? Let us know in the comments or on Twitter at @WhatsTrending.