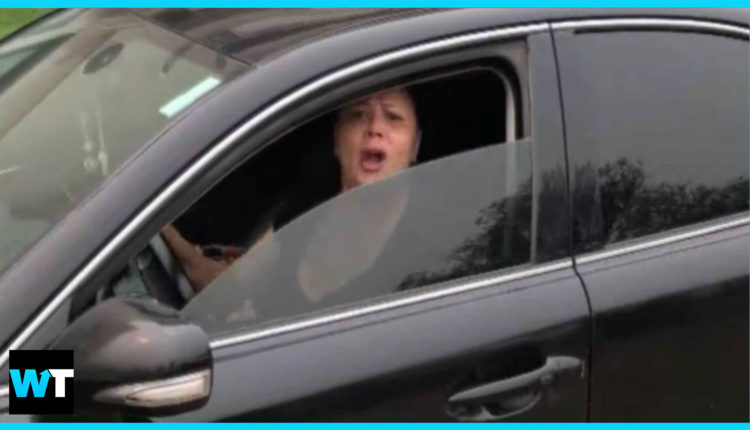 An Edmonton woman filmed in a viral racist rant has been charged with causing a disturbance…but she says she’s not sorry.

Angelique Barfield has been in an ongoing parking dispute for weeks with Rahul Kumar. It came to a head in August when Kumar noticed a car parked in an emergency lane. He asked Barfield to move her car, and said he’d had to do this numerous times in the past.

That’s when she started screaming racial epithets, and he began filming.

-Takes a real brazen kind of person to wait until the phone comes out and then start doing a really racist Indian accent.

You can tell from the way she’s talking that this isn’t their first encounter. And she described prior events in defending herself to the news. She said: “It’s not even the whole story. It’s the end of something that happened three weeks ago [in] which… my friend who lives there had to call the police on that person.” She says in one incident, Kumar pulled his vehicle up to hers and turned on his brights.

But anything in the past kind of goes right out the window once you start being a loud racist on camera.

Oh, and then later Kumar’s kids came outside and she kept going. She imitated his voice, says he has “shit-colored skin” and yells at him to go back to his country, but…didn’t ya know it, she’s not a racist.

That’s what she told CTV news when she called to complain to them about their coverage of the video. Yeah, she called up the news station to say “Fake News” and “He started it.” She told CTV “I have no problem with what happened. I’m sorry you guys have a problem with it.”

Well, yeah, racists don’t normally have a problem being racist. The whole point is that other people have a problem with it.So, there are a couple of things about this Racist Rant that make it a little different from the scores of other racist rants we cover.

First off, this is in Canada! Which makes me feel a lot better as an American. Here I was going around thinking that white people spewing racist vitriol at any iPhone they see was strictly a domestic issue.

It’s good to know that our neighbors north of the border aren’t perfect. Another thing that’s different here is that Barfield has kind of thrown askew the entire shame/apology cycle. Mostly because – she’s not apologizing!

Lady, how can we appropriately shame you if you feel no shame?!

So Angelique Barfield isn’t going on an apology tour, but she has been slapped with charges for causing a disturbance and “mischief” for that moment at the end of the rant when she spits on his car.

What do you guys think? Let us know in the comments or on Twitter at @WhatsTrending.