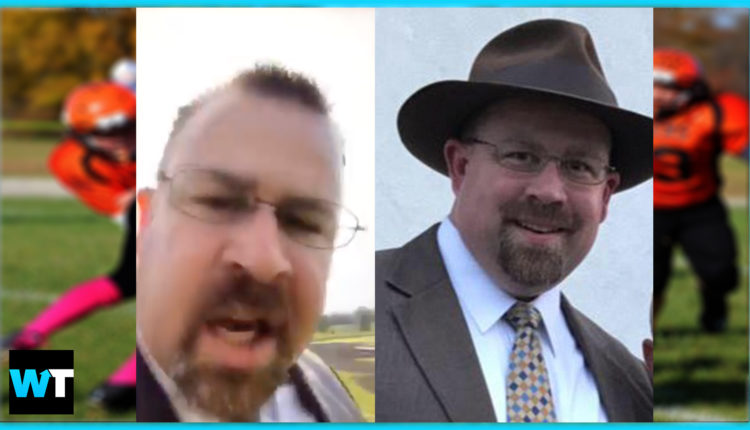 A Baptist preacher in Kentucky is facing backlash after an angry video rant where he’s critical of a youth football game.

Pastor Ernie Spence was sent into a fit of rage when he saw some kids playing football at Trimble County High School. Spence’s rant seems directed at those who would spend their Sundays watching or playing football instead of going to Church.

At one point, he even suggests that kids who play football on Sunday will be going to hell. After the backlash started, Spence deleted the video, though it has been reuploaded by Sarah Oak on Facebook.

One of the moments from the video that has upset people the most are Spence’s comments about the cheerleaders. According to Sarah Oak, the “cheerleader” uniforms are a t-shirt and shorts. And the girls doing the cheerleading were apparently as young as 7 years old.

Now, reasonable people can have a legitimate gripe with having 7-year-olds be cheerleaders – but to call them prostitutes? That comment in particular has inspired a wave of negative reviews on Fellowship Baptist Church’s Facebook page.

Melissa Irwin wrote: “I am deeply disturbed by your pastor. He publicly called 5-6 yr old children prostitutes for wearing t-shirts and shorts. First, he has no right to judge anyone. He is not God. Second, pastor, why are you viewing children as sexual objects?” Paula Breeden wrote: “I used to think I wanted to go here but not after seeing ur pastor video. So sad. I will pray for ur church cause no man of God should ever call little girls prostitutes or dog kids for playing sports. He needs to refind God.”

Pastor Spence has not addressed the controversy online, instead posting a grab bag of Bible quotes and anti-Mormon memes. But one of the cheerleaders’ parents, Mitchell Welty, messaged Pastor Spence on Twitter and posted an excerpt of their conversation.

He responded to Welty: “If I didn’t believe it to be correct I would never have said it. That is spreading the Word of God. I removed [the video] because I was tired of a bunch of people “pinging” my phone every ten seconds. Why don’t you come to church sometime and hear the Word preached.”

Welty has since had further conversations with Pastor Spence, who says his congregations is behind him and he will not be resigning. But Welty is asking Trimble County to step in and prevent Pastor Spence from being allowed at any youth activities or public event where children are present.

Spence has said he won’t show up at the high school any more when children are playing sports. But Welty says he’s still concerned as a father, and has expressed trepidation over Spence’s Facebook photos of his guns, which he’s named things like “Mercy, Grace and Kindness.”

What do you guys think? Should the community let this thing go, or is there legitimate reason to be concerned about Pastor Spence being around kids? Let us know in the comments or on Twitter at @WhatsTrending.

Black Man Arrested For SITTING IN HIS OWN CAR?!