And why did the introduction insult her so much? 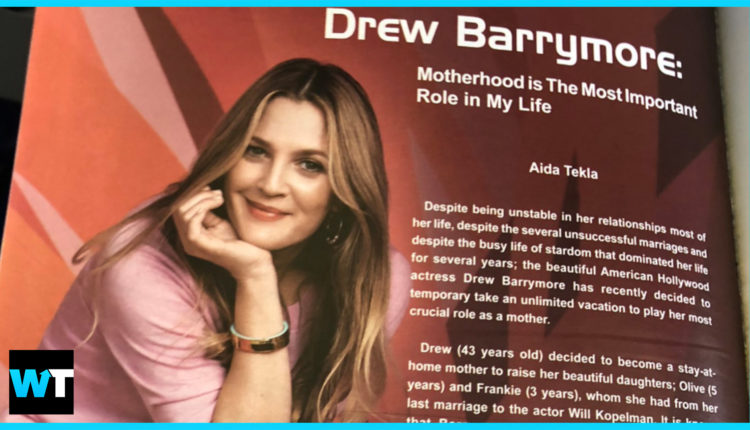 This interview with Drew Barrymore in the Egypt Air in flight magazine is, umm, surreal. pic.twitter.com/fN3lNHXbL0

An interview with Drew Barrymore in EgyptAir’s in-flight magazine is weird as hell, leading us to speculate that it’s either very fake, or very poorly-translated.

Adam Baron is a writer and political analyst who’s an expert on the Middle East, particularly Yemen, but something not related to global politics caught his eye on a recent EgyptAir flight.

And it really is.

The interview from Horus contains bizarre quotes that appear to be either made-up by a non-English speaker, or poorly-translated from English to another language and then back to English.

Stuff like: “I find this a great opportunity to encourage every woman who is overweight to work on regaining her beauty and body, especially that it is not as hard as one may think”

Or this one: “I cannot deny that women made a great achievement over the past century; there is a significant progress recorded by people who study women status throughout history.”

Like, she may have said something about the progress women have made over the last 100 years, but it’s doubtful she would have said: “…there is a significant progress recorded by people who study women status throughout history.”

The introduction to the interview is also very bizarre. It says things like: “It is known that Barrymore has had almost 17 relationships, engagements and marriages” and “she has been subconsciously seeking attention and care from a male figure; but unfortunately things do not always go as planned and she has not yet succeeded in any relationship for various reasons.”

That’s nuts! Typically, a magazine profile of an actress won’t start by insulting her. Also, what does “almost 17 relationships” mean? Like, 15?

So, obviously, this raised a lot of eyebrows and people started reaching out to Barrymore’s team. Buzzfeed got in touch with Chris Miller, the president of her production company, who said “I’m not aware of this at all and don’t have any record of this interview happening…” and another rep told HuffPost that Barrymore “did not participate” in the interview.

But EgyptAir is standing by the interview! Responding to a journalist who covers aviation news, EgyptAir tweeted: “Dear sir, this a professional magazine interview conducted by Dr. Aida Tekla, Former president of the HFPA (Hollywood Foreign Press Association) and one of the voting members of the Golden Globes.”

Sure enough, Aida Takla-O’Reilly is the former president of the Hollywood Foreign Press Association, and this might help us figure out what happened here.

Drew Barrymore did do an interview with Dr. Takla-O’Reilly for the Arabic-language magazine Ahram, and when you translate what’s printed in Ahram from Arabic to English, Barrymore’s answers appear to make a lot more sense.

So our best guess is that Horus somehow got the rights to use this interview from Ahram, and then botched the translation from English to Arabic, and then back to English.

Oh, and they spent their introduction to the interview insulting Drew Barrymore as well.

For his part, Adam Baron is a little surprised that his photo on EgyptAir went as viral as it did.

What do you guys think happened with this weird interview? Let us know in the comments or on Twitter at @WhatsTrending.