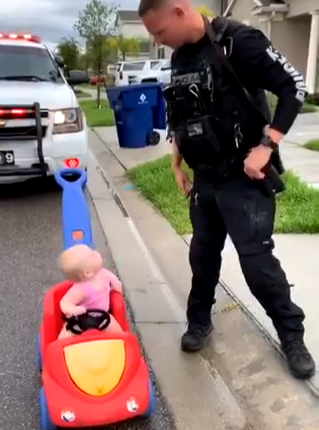 “I don’t think this is a laughing matter,” Officer Alex Kipp says to the little girl, less than a year old, he pulled over in an Orlando FL suburb on Tuesday. The baby, his daughter Talynn, didn’t agree – she was grinning ear-to-ear the whole time.

Officer Kipp is a member of the Orlando Police Department, and was on his way home from work when he spotted Talynn in her toy car, driving on the wrong side of the road. Adorable as this crime was, he still had to jump into action. Luckily for us, Talynn’s mom was there to record the whole thing.

'I don't think this is a laughing matter:' Cop dad 'pulls over' 10-month-old daughter https://t.co/aKKyxTY1Jr pic.twitter.com/0P3QCHLQVX

Officer Kipp eventually lets his daughter go with a stern warning, even though she didn’t have her license with her.

The adorable video has made the rounds across Twitter and morning news shows this week. Orlando PD posted a link on their page first, and then the story spread.

OPD Officer Alex Kipp was returning home from work when he pulled over his daughter Talynn for driving on the wrong side of the road. When asked for her license, registration, and proof of insurance, Talynn laughed at Officer Kipp and was subsequently let go with just a warning. pic.twitter.com/CIjyEhv02c

According to Mom, Dad is Talynn’s best friend. She certainly looks like she’s in safe hands.

For more stories on WhatsTrending.com, head to the sidebar or find us on Twitter, Instagram, and Facebook @WhatsTrending. Or check us out on Roku, Amazon Fire and Apple TV under the search option “What’s Trending”!