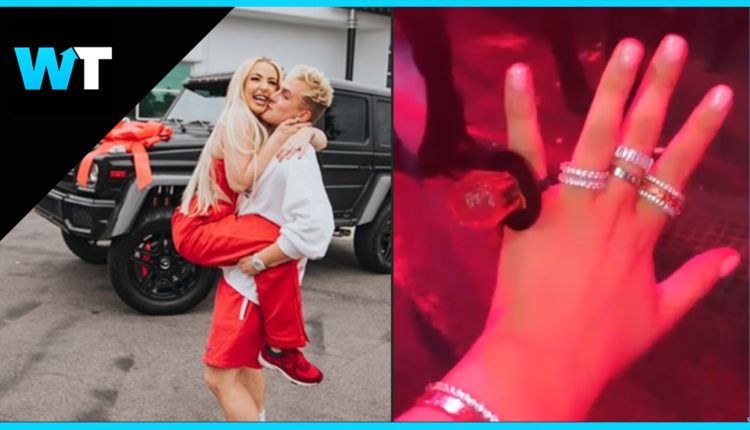 Tana Mongeau just turned 21, and Jake Paul gave her a big surprise for her birthday.

Tana is a YouTube creator with over 4.5 million subscribers whose vlogs and storytimes have earned her an MTV show titled, “MTV No Filter: Tana Turns 21”.

The cameras have been rolling for a few weeks as Tana recovers from an intense breakup with ex boyfriend Brad Sousa and also a breakup with Bella Thorne… yeah. It’s complicated.

But, Tana jumped right into a fake clout relationship with Jake Paul, where the two began collaborating on videos together and discovered that their audiences actually really loved seeing them together.

Tana has been very clear that she intends to continue having open relationships unless she finds the love of her life …as she told Shane Dawson.

All along, it’s been clear that Tana and Jake’s relationship has just been a big joke, but at Tana’s birthday party, Jake made a pretty big statement.

First, Jake surprised Tana with a car she’s been bugging him to buy for her… and then, he proposed??

It looks like Jake originally proposed with a Ring Pop, but later Tana posted a video with a real ring. Maybe the ring is hers. Or maybe she borrowed it for the photo? It’s hard to tell.

Marija said, “I thought a car was a bit much and now an engagement; these people really live in the parallel universe of rich people doing silly stuff because they can

you got to love it”

Like David Dobrik, who married Jason Nash’s mom in Vegas. And who knows? Maybe Tana and Jake will follow suit.

But what do you think? Is this engagement real? Let us know in the comments section.

Check out more stories like these on WhatsTrending.com, or find us on Roku, Amazon Fire, and Apple TV under the search option “What’s Trending”!