She only wanted one thing...Doritos. 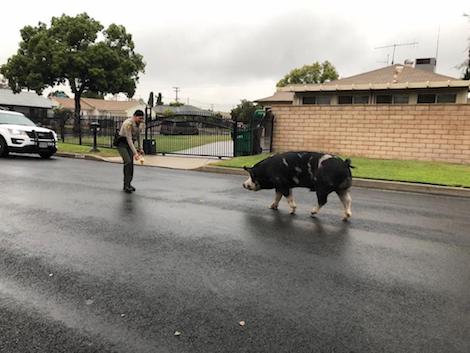 How do you guide a pig back to its home? With a bag of Doritos, apparently. pic.twitter.com/QSkO5JOjYt

A giant pig, which has been described as the same size of a small horse, went on the loose in San Bernardino County, California, on Saturday. She apparently went missing because she had a case of the munchies and was on the hunt for some food.

Although the LAPD were called to deal with the pig, she was completely innocent. As she walked ever so casually through the streets, she only had one thing on her mind – Doritos. It seems like the police officers, Ponce and Berg were able to read minds, as they pulled out a bag of the crunchy chip and began to lure the pig back home.

THIS GIANT PIG IS INNOCENT WHO WOULD NOT BE LURED BACK HOME WITH DORITOS https://t.co/L7RaxHjLNI

We can’t begin to imagine how strange this police call must have been. Imagine working your shift, waiting to see what kinds of crime awaits you that evening, and suddenly you get a phone call for a giant pig with munchies that wants some Doritos…

Well if this doesn’t go on the list of unusual calls.
Highland received a call reference a pig the size of a mini horse?? running around. Deputies Ponce and Berg found him & due to previous calls, knew where he lived. They lured him back home with Doritos.?@HighlandPolice pic.twitter.com/pbB9ZKk5iG

When on patrol, why is it important to keep snacks on hand? Our friends from @sbcountysheriff found out when they received a call of a pig roaming the streets and lured it back home with some @Doritos they had in their lunch bag. Someone buy that Deputy a years worth of chips ? pic.twitter.com/04lMizDwwW

Hm, that description does sound a bit like me last night and I do enjoy one, maybe ten bags of Doritos now and again…

You have to give credit to the pig, though. She knew what she wanted, and she knew how to get it. It’s not often that people would go to such lengths for a packet of Doritos, but determination is a crazy thing and she sure had a lot of it.

Do you think the pig got what she wanted? Do you reckon her plan was clever? Let us know in the comments, or on Twitter at @WhatsTrending.