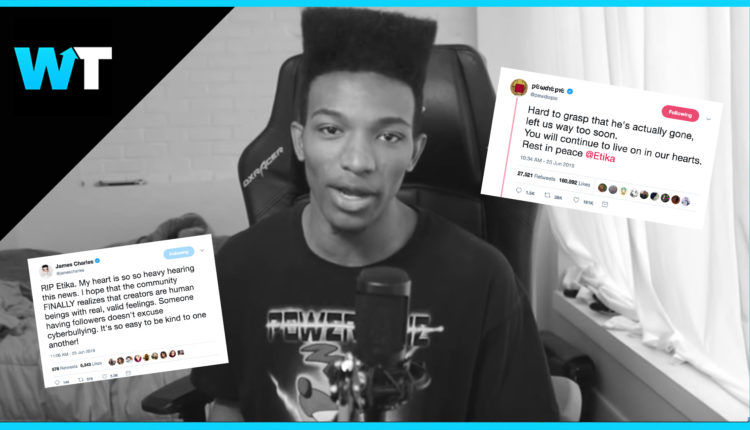 YouTube gamer Desmond Amofah, aka Etika, has passed away, and both fans and fellow creators are mourning the loss on social media.

Etika was a 29-year-old gaming personality with hundreds of thousands of followers on YouTube. Starting in April of 2019, though, his fans started noticing some troubling content on his social media, including apparent suicidal thoughts. He was detained by New York police and evaluated before being released.

Then, on June 19th, Etika released a (now-deleted) video in which he seemed to be saying “goodbye” to his fans and friends. In the description of the shocking video, he wrote:

“The good times however! MAN were they good. I’ve lived an incredible life filled with thrills and happiness […] God I’ll miss you all so much.”

The language of the video upset many of Etika’s followers, and the next day, he was reported missing by NYPD.

Fans held out hope over the weekend that the YouTuber would be found, but those hopes were dashed when Etika’s body was discovered on Tuesday.

Everyone seems heartbroken by the news. YouTube’s Creators Twitter page has posted their condolences, as have James Charles, PewDiePie, Keemstar, and countless others. The few attempts to badmouth or exploit the tragedy have been slammed by the YouTube community, united around a departed friend.

Congrats #jaystation for getting 72k dislikes in under 24 hours. But seriously @YouTube either take this video down or give this dude a strike because it’s about time he has gotten a punishment. Etika would be pissed if he saw this #EtikaForever pic.twitter.com/WYSvM99xcd

Rest in Peace Etika. I've been growing up watching your Vids since I was 14 and I never expected you to leave us so soon. I will miss you so hopefully one day we'll meet again and settle it in smash.#JOYCONBOYZFOREVER pic.twitter.com/ICtkLm3lid

Made my own stickers for my joycons to honor Etika. #JOYCONBOYZ4LIFE pic.twitter.com/QmJStmmEWa

YouTube and many of Etika’s followers have used the tragedy as a way to bring awareness to mental health concerns. If you or someone you love is struggling, the National Suicide Prevention hotline is available 24/7 at 1-800-273-8255.

For more stories, check out WhatsTrending.com or find us on Roku, Amazon Fire and Apple TV under the search option “What’s Trending.”