Not exactly the home makeover they were hoping for... 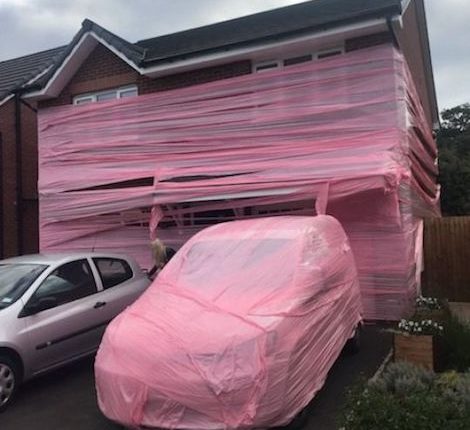 Newlyweds, Jenny and Jonathan Minger, returned to their new home after a lovely honeymoon getaway to Cancun, Mexico. Even although they had just been away on a once in lifetime holiday, they were excited to get back to their daily routine and start their lives as a married couple together. However, they were somewhat unlucky upon their return, as they were shocked when they noticed that their home had been covered in sticky pink plastic shrink wrap.

Probably not the ‘welcome home’ that they had expected, as I’m sure the two wanted to get over their holiday blues, unpack and relax. Instead, the two had to spend their evening cutting away at plastic shrink wrap from their humble abode with a pen knife, so that they were able to get inside. Although, this wasn’t just some random prank, but a cunning plan played out by the couple’s closest friends. I know it’s hard trying to find the perfect gift for a couple, but I’m sure the two would’ve been happy with anything else other than this…

Funnily enough, the masterminds behind this prank weren’t just friends of the couple, but none other than Jonathan’s bosses. Jonathan works as a dairy farmer, and the pink plastic shrink wrap is used in his job to promote breast cancer awareness. So luckily for the bosses, they didn’t have to spend any extra cash on the props for this prank, just their precious time. Although, they can’t claim all the brains behind this, as apparently the prank is a tradition that happens to every couple after they return from their honeymoon. I’ve never heard of this tradition myself, and I wouldn’t be very happy if this happened to me, so heads up everyone.

Although it only took half an hour to get the majority of the plastic wrap off their house, it took three whole hours to successfully pull off the prank, so I’m not sure who was worse off in this situation…

I don’t know about you, but I don’t have that much free time, so I think next day delivery option from Amazon might have to be good enough for my friend’s wedding gifts.

Even though Jenny and Jonathan appear to be good sports about the whole thing, they still want to get their revenge of this very frustrating prank. Get ready, bosses, you’re in for a big surprise!

Do you think the prank was harsh or a good joke between friends? Have you got any prank stories to tell us? Let us know in the comments, or on Twitter at @WhatsTrending.