This seal, much like an eel in a nose, is endangered. 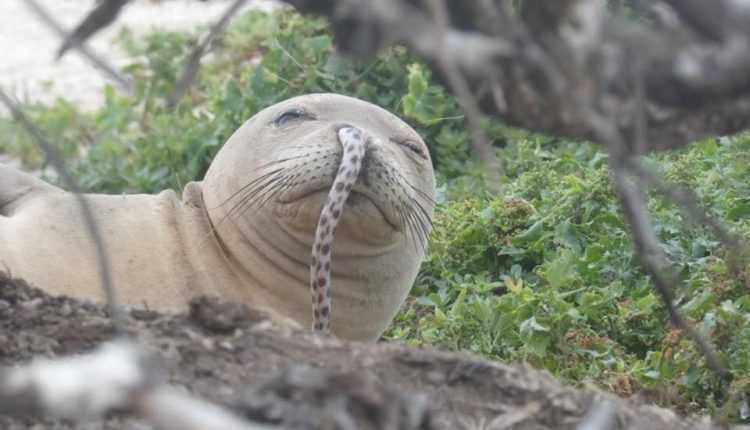 The seal is a monk seal, and was found in Hawaii by the Hawaiian Monk Seal Research Program which discovered a mass of these poor creatures with eels stuck in their noses. The program posted the photo originally on Facebook, saying:

Mondays…it might not have been a good one for you but it had to have been better than an eel in your nose. We have reported on this phenomenon before which was first noted a few years back. We have now found juvenile seals with eels stuck in their noses on multiple occasions. In all cases the eel was successfully removed and the seals were fine. The eels, however, did not make it.

Mondays…it might not have been a good one for you but it had to have been better than an eel in your nose. We have…

“The eel was successfully removed from [the seal’s] right nostril this afternoon in 45 seconds! Hooray! It was definitely weird, as the eel was almost two feet long, which was surprising as only about four inches were hanging out of [the seal’s] nostril… It was almost like those magician trick scarves that they just keep pulling out of the hat. We are pretty sure the complete animal was removed, as the skull was found, but some fins or spines may have come off the eel during the removal. The seal did not struggle very much, and no blood came out when the eel was being removed.”

Monk eels are endangered, with only 632 left in the wild, and according to the same Newsweek article, the biggest threat to their survival is human beings, particularly those who fish, disturb their habitat and pollute. Damn. And here I was ready to blame it all on the nose eels.

What do you think of the damn nose eels? Let us know in the comments or on Twitter at @WhatsTrending.

YOUTUBE 2018 REWIND: We Have Ninja, Liza Koshy and Someone Named Will Smith

Shortly after the launch, the astronauts revealed a sneaky “stowaway” on board.