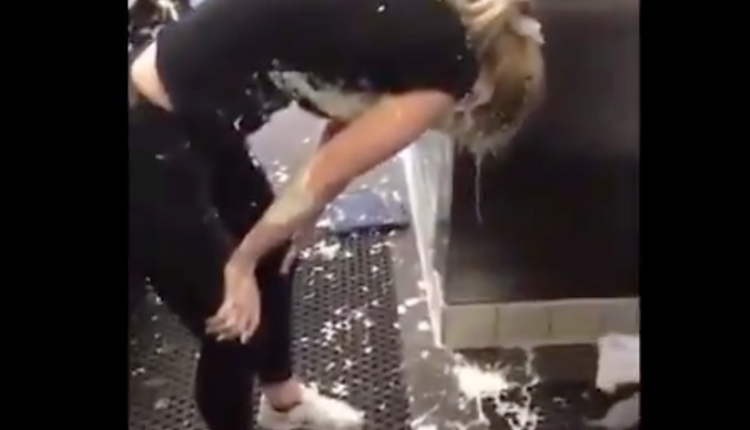 If you’re looking to go viral anytime soon, maybe try spilling 22 quarts of ranch dressing! The moment a restaurant worker dropped 5.5 gallons in the kitchen was caught on camera and shared at different angles by her coworkers on Twitter.

“So a couple days ago, one of my coworkers accidentally let 22 quarts of ranch dressing slip out of her hand…” said Twitter user @BorboaGrant.

The video shows the restaurant worker laughing her way through the accident, covered in splashed ranch. The 18-second viral video has almost 8 million views and has led to several others to share their unfortunate spills on the internet. The spills consist of everything from barbecue sauce to sweet tea.

18 quarts. glad i’m not the only one 😪😪 pic.twitter.com/HBfjSLvUin

I did that with melted white chocolate in a container just like that one. Unfortunately it hit the floor not a sink. So gooey to clean up while racing time against it setting up as it cooled.

My pal had this happen with sweet tea (yes, her face is ok) pic.twitter.com/zc2Qi2evif

But, for some reason, ranch always seems to cause problems. Whether it be forgetting the bottle doesn’t have a squeeze top and covering your plate in ranch, or any of the other restaurant scale accidents below.

One of my coworkers had a similar experience making ranch i accidentally took a picture on Snapchat right as it happened 😂 pic.twitter.com/fuICCQmkWE

Have you ever had this unfortunate of a spill? Let us know in the comments or show us on Twitter at @WhatsTrending.

The Man Who Matches His Travel Destinations