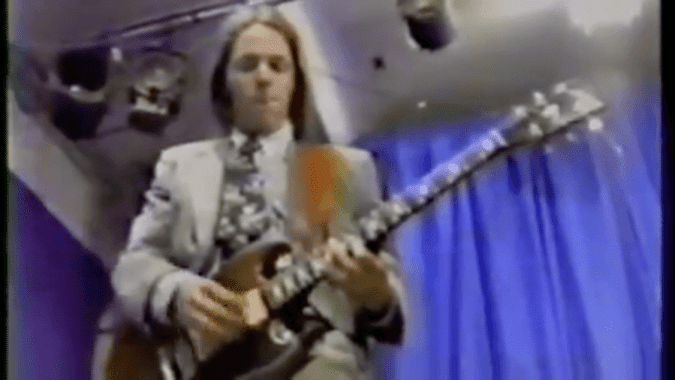 TED CRUZ: Back in high school, my opponent was the guy who invented the cool S thing that everyone loves to draw. Me? I was too busy doing a little something called “fishing my briefcase out of the pool” and “crying at Model UN.”

Ted Cruz is an absolutely confounding figure. Despite being absolutely despised by his own party, his own constituents, and really — anyone who wants to look at his face for a few minutes — he’s somehow remained a Texas Senator for for all throughout a very long run. Now, due to this and his associations with Donald Trump, Ted Cruz is losing to a left leaning opponent, Beto O’Rourke. Beto O’Rourke is a Democrat within one point of beating Ted Cruz which is unheard of in Texas, so naturally it’s time for the Texas GOP to really roll up its sleeves and try to get their guy to win. Unfortunately they did it by unearthing uhh… just how damn cool Beto was and showing Beto in his 90’s band.

OH NO! Texans might vote…for someone cool who enjoys music? Is that where the GOP is going with this? https://t.co/0GB91CjUJV

Beto O’Rourke you see was in a band called “The Foss”, and they are absolutely bad ass. Amongst their members they sport Cedric Bixler-Zavala who later would play in At The Drive In and Mars Volta. Beto O’Rourke can be seen playing on bass, and in case you wanted a video of the entire thing, it exists! Footage of Foss (which means waterfalls in Icelandic, you see) has been put online from the time they played a public access show in El Paso in 1993. It’s cool and charming and human. You know, all the things Beto’s opponent kind of has trouble with.

Now, I’m no doctor, but Beto’s band freakin rocks my ears off. This is so hardcore and punk and awesome and fun. Beto shows a personality and humanity that, if anything, in a state which includes Austin is sure to be a plus. I’m sure more people can relate to having a rock band in high school then doing uhh– uhh– wait, what did Ted Cruz do around the same time?

Is Ted Cruz really trying to scare voters with pictures from Beto's band days when there are pictures of him out there as a mime? pic.twitter.com/waHTLM1fi5

The Texas GOP Twitter account now goes into the classic “I’m not mad I’m laughing” mode, claiming, as Republican losers often do, that it’s non Texans and liberals who find the photo cool. Something that the @ replies of the Tweet quickly swept aside.

Based on the reaction to our tweets we can confirm that Beto is in fact going to receive 100% of the vote from Buzzfeed contributors, out of state liberals, and people who use the word "rad." We feel very owned :'(

Lifelong Texan here: exactly what cocktail of booze and pills do you imbibe to get through another day of stumping for confirmed Reptoid Ted Cruz?

It’s also worth pointing out that Ted Cruz did go on Buzzfeed in the lead up to the 2016 election, did some awful Simpsons impressions, and left.

The GOP seems to be continuing its tactic of reminding people that– unlike the despised creep they’re peddling, Beto is… kind of cool.

So Beto has been ducking debates with Senator Ted Cruz. We can't imagine why, but we do have a few ideas… pic.twitter.com/3n2HtwY9pQ

Damn, Beto doesn’t want to talk to Ted Cruz and he is very cool. Talk about my guy. You can find Foss/Beto’s MySpace EP here. Enjoy!

You can donate to Beto’s campaign here and who knows, maybe he’ll drop a dope track with better Simpsons impressions than Ted Cruz had.

What do you think of Beto O’Rourke’s dope as hell band? Let us know in the comments or on Twitter at @WhatsTrending.

You may remember a few weeks back we reported on Claudia Conway, the daughter of a Trump Advisor who was…

YouTuber Protests for Black Lives Matter in “America’s Most…