Democracy... for him to poop on! 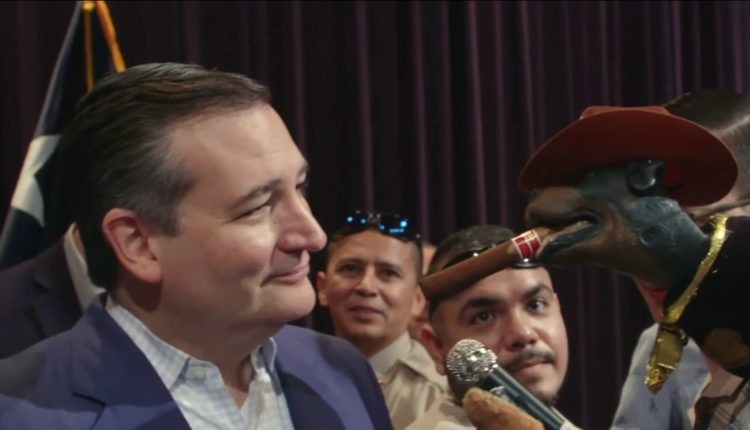 Triumph the Insult Comic Dog is maybe our most reliable political commentator ever since Jon Stewart left the Daily Show. Sure, he might be a sock like puppet pilot by legendary comedian Robert Smigel, but what other comic has landed as many cruel burning jabs at the political figures of the day. This segment– where the Conan O’Brien regular is “loaned out” to Stephen Colbert so he can make his little dog voice heard in the midterms — is a prime example of this. At first Triumph goes over some of the accomplishments on his incredibly excellent Hulu talk show (it’s still on Hulu! Go check it out and relieve the nightmare of watching that New York Times election scale tip in on November 9th, 2016), and then proceeded to show the incredible clips of his dog puppet self infiltrating both a Beto O’Rourke camp and a Ted Cruz camp. Check it out below.

Beto O’Rourke and his supporters naturally come out better than Ted Cruz, which is– well, a no brainer. Beto O’Rourke used to be in a rock band and Ted Cruz favs porn Tweets on 9/11. This should not be such a tight contest except for… well.. you know. All of the voting fraud the GOP may or may not be committing regarding voting machines which change Ted Cruz votes to Beto O’Rourke votes, so Triumph hands out stickers such as “I Voted I Think”, showing how uhh— well, the results of this election, just like in so many (such as Georgia), may not be the results of what the people who showed up wanted to vote for, but hey, we’ll see what happens.

Triumph finally meets Beto O’Rourke and has a friendly chat with him, saving his sharpest barbs for Ted Cruz. Oof. And boy does he have them coming. Triumph makes fun of Ted Cruz for being dislikable, for allowing Trump to make fun of his wife and continues to grovel at his feet, and when Cruz makes a weak joke that the Democrats neutered Triumph, not the Republicans, Triumph jokes that Ted Cruz has already been neutered by Donald Trump.

Triumph then leads the crowd in a chant of “Lion of the Senate Ted”, which becomes “Lion Ted” which of course sounds like “Lyin’ Ted”. Look, it’s all very fun.

What did you think of the segment? Let us know in the comments or on Twitter at @WhatsTrending.

Shrek Being Rebooted For Some Reason