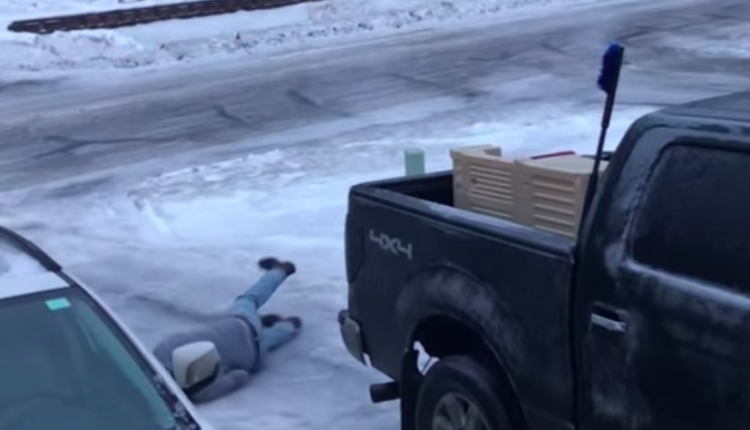 Fathers! Is their anything that, when they’re the best, their mighty hearts won’t do for us? Their ungrateful children? The love of father figures is always such a strong force, but this video shows it in action as a dad slips and falls on the ice for a full minute and a half trying to pull a toy kitchen from the back of a truck for his little girl.

First off, how icy are these roads? I live in LA. For me at this point ice exists mostly as a concept that may or may not be copyrighted by the Disney corporation for the likes of Frozen and its many sequels. The dad can’t get a grip at ALL. This is video game platformer levels of icy right here. He can barely get up. Hell, he can barely CRAWL up. And that car that crosses through the icy as hell road. I know it drives through pretty quickly, but the guy could fall through the ice pretty quickly too! Too much damn drama if you ask me!

Still, at long last, the drama subsides! The clouds part! The dad hikes the kitchen up the hill and gives it to the little girl! The worlds spin rightwards ever so forever more and the universe breathes a ray of hope. Huzzah for good dads who work hard! Huzzah! Huzzah! Hu…zzah!

Is there a dad you want to share this with? A dad or an ice monster, so he can laugh at the destruction his powerful ways have caused for the poor soul. Or if your dad is an ice monster (or your ice monster a dad) then my friend… you have hit his YouTube sweet spot and get ready to see him cry snow or whatever.

BlockChain Report 11/16: Are There Malicious Crypto Apps on Google Play?