Well, this is fun. 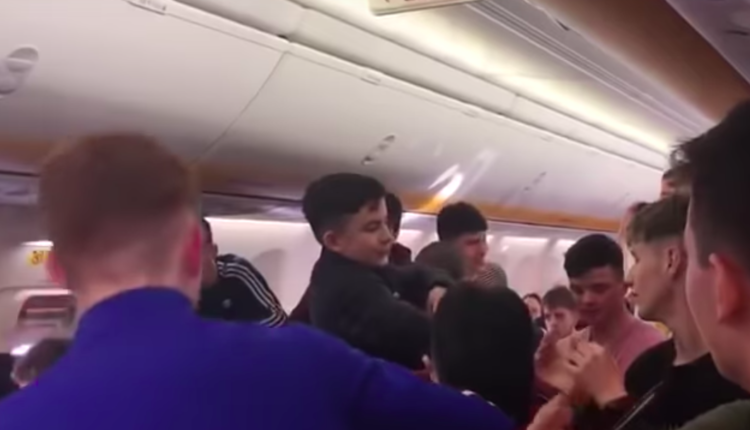 Airplanes feel like they exist in their own private universe, in a dimension parallel to ours but different from ours. Maybe that’s why certain people feel okay fighting and having sex on planes and stuff, but once in a while we get a video that’s so damn charming, my hand flies on the “stop the presses” button here in the What’s Trending newsroom just to post it, and the video in question is here: Irish school children singing and doing step dances on a plane for the amusement of themselves and, inadvertently, you, the viewer! Check out the video below, and view the delights it holds therein.

Ah, there we go. Now isn’t that pleasant? In a week when a dumb racist teen not only suffocated the conversation, but hired a PR firm to try to get himself absolved of being racist and then tried to suffocate it further, it’s nice to see teenagers acting, you know, good, normal and joyful. Thank you Irish teens!

The teens were from St. Brendan’s College in Killarney, Ireland, the flight was a Ryanair and the songs they performed were “Step It Out Mary” and “Red Is The Rose”, in case anyone has to write a book report on these guys, and needs all the facts, damn it!

If you were on a flight, what songs would you sing if everyone else could join in? I think I’d do “Chilly Down” from Jim Henson’s “Labyrinth”. See, I’d want to do Bowie, but I would want it to be a deep cut, you know? That feels like a deep cut. I mean, this is a popular movie, do you guys even know the song I’m talking about!? Because I barely do, it is an obscure one that just happened to be playing while I was writing the entry. It’s good, though, in my humble opinion.

But anyway, what do you think of the video? Let us know in the comments or on Twitter at @WhatsTrending.