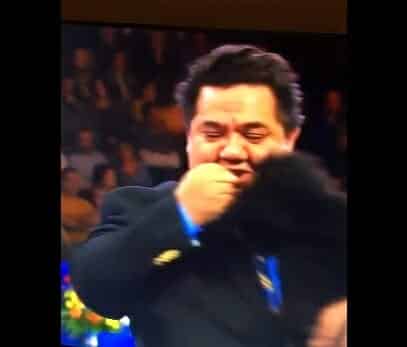 If you love dogs, and seeing those dogs as you peel potatoes or checked on a cooked turkey for Thanksgiving, then the National Dog Show Presented by Purina is for you. You see dogs who’ve trained their entire lives to be able to jump through a hoop on national TV, and the sweet owners who love them, cuddle them, and it brings me no joy to say this– steal their treats on national TV! Gasp! No! Scandal! Gasp!

my man just swiped a treat from his dog on national tv pic.twitter.com/qCh0rndGgw

In a video posted to Twitter by Twitter user @_FleerUltra, with the caption “my man just swiped a treat from his dog on national tv”, we see a man do just that, as he is feeding his dog a little treat, the moment a judge’s back in turn, he jollily eats the treat and smiling, continues with his dog.

Look. It doesn’t seem cruel. Everyone is fine. And a sweet looking guy just stole a treat from a damn dog! Dog! You have to run! Jump through the hoops, and over the side of the stadium, to the universe of treats on the other side! Run my little pup, run!

Also, a dog named Whiskey won the show. What a good time!

The Whippet wins Best in Show in the National Dog Show! Share why you’re thankful for your pet using #Dogthanking and tagging @Purina, and Purina will donate $1 to the @tlrarf for every story shared (Up to $25K, thru Nov 25th).

What do you think of the video! Let us know in the comments or on Twitter at @WhatsTrending.