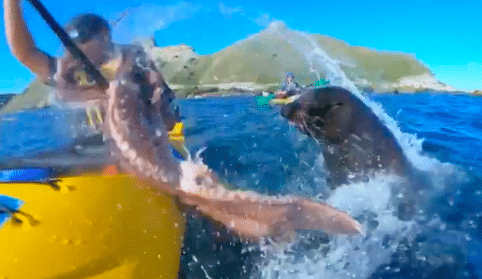 This video is unbelievable. Coming from the Instagram feed of one @taiyomasuda in New Zealand, we see a seal pop up from the ocean, look at a man paddling in the eye, and slap him in the face with an octopus. It’s incredible. It’s the second video in our very popular “seal involved with slaps” series, ever since that cat slapped a seal. This time the seal is the one doing the slapping!

The footage shows Kyle Mulinder as the slapped party, recorded on a GoPro and– well, what am I doing droning on for? Check out the octopus slapping seal action below!

新しい @gopro #Hero7Black で衝撃映像撮れた?? 4K60fpsの安定化オンで撮ったからここまで驚いて全部撮れてた！こんな楽しいカヤックはじめて！！音声も海とかのガチャガチャ音ないし最高！ @barekiwi getting octopus smashed into his face by a seal⁉️ I’ve never had such an amazing kayak everrrrr!! I am super stoked that the new @goproanz #Hero7Black captured without missing a thing although we shook so much, #hypersmooth the stabilisation managed it so well!! I made a little montage to show how good the audio came out!! No noises super clean!! Thanks to @kaikourakayaks @purenewzealand @kaikouranz @goprojp @howtodadnz @snapair for such an epic trip!! #gopro #ゴープロ #ゴープロのある生活

Just art. Absolute art of the highest order. But what is the story of this video? Why did a seal slap this guy with an octopus? Man, it’s so early, and this is just our third insane nature video of the day after that moth drinking that bird’s tears. Good job, nature, you’ve blown my mind again.

Well, in an interview with the Australian Yahoo (this sounds like I’m referring to and insulting a specific person, but it’s just the Australian version of Yahoo), this was the result of a long and drawn out battle the paddlers were witnessing between the seal and the octopus that went beneath and above the waves before the seal leapt up and accidentally slapped gentle paddling Kyle in the face with a suction cupped aquatic creature.

“We were just sitting out in the middle of the ocean and then this huge male seal appeared with an octopus and he was thrashing him about for ages. He thrashed it in mid fight and my face happened to be in the wrong place at the wrong time.”

Kyle, you are so understanding towards being slapped by a seal. Kudos, sir. Kudos. And to the seal I say… come to land. We want to put you to work. You must have a TV show where you slap strangers. Please, this I beg of you.

What do you think of this perfect video? Let us know in the comments or on Twitter at @WhatsTrending