If you're splicing together some Zapruder style film of the incident, here's some footage for you. 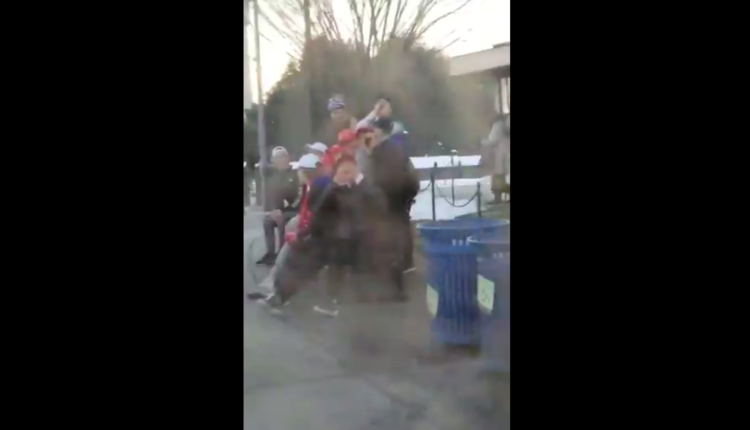 In between the day the video of Nathan Sandmann harassing a Native American elder emerged and the day that the media, always beyond thrilled to excuse a white kid and demonize a person of color, went “golly, but what if black people made him so mad he had to do that stuff. Just check out this video of him getting mad”, something magic happened: Nathan Sandmann hired a PR firm. So now Sandmann is on his merry way, touring news room to news room, trying to explain his side of the story which the media, the same one that painted Michael Brown, a black child who was murdered at the hands of a police officer as “no angel”, laps up. But more videos have emerged to show that maybe, just maybe, Nathan Sandmann and his classmates were tearing a swath of harassment through Washington, DC with videos of them screaming creepy things about rape at women and harassing others. There are cameras everywhere, man. If you think you can hide forever, take a breath and hold on a second, because here are the videos in question.

First up, here are the kids, who some were doubting if they were chanting “Build That Wall”, shouting “it’s not rape if you enjoy it”.

Latest Covington Catholic video from the Lincoln Memorial incident on Friday has surfaced where one of the students yells, "It's not rape if you enjoy it!"

Good luck spinning this one… pic.twitter.com/4yJXHrLP0Z

As Mike Schur, the creator of the Good Place put it, it’s going to be hard for Sandmann’s PR firm to spin this particular story. I mean, he put it sarcastically, but you get it.

Looking forward to the follow-up letter from that Lexington PR firm explaining why this is all a big misunderstanding and these fine young men have been unfairly maligned. https://t.co/B1CqPbFQIe

Next up is the video of the kids harassing teen female visitors to the capitol.

The Covington Catholic boys harrassed my friends and I before the incident with Nathan Phillips even happened. I'm tired of reading things saying they were provoked by anyone else other than their own egos and ignorance ??‍♀️ pic.twitter.com/utdPFii92D

Mike Schur chronicled the entire thing on his Twitter feed, and his mood reflected that of the media itself which, unshockingly, took the kid’s side for a brief moment before finding these new videos.

So– yeah. If you’re going to be the kind of person who wants to watch these videos as if they’re the Zapruder film of the Kennedy assasination, here you go. Here’s more videos for your case of “were these kids who tried to freak out an old Native American man actually racist?”.

I mean, they’re about to meet the president, which, if you’re a private citizen, is an honor bestowed upon only the biggest of racists.

James Shaw, Jr. took a bullet stopping a mass shooter at a Waffle House in Tennessee, and then raised over $200k for the shooter's victims and their families.

Not even a word of thanks from the President.

If you're racist enough they let you meet the president

Well, what do you think of all this trash? Do you still think the Covington kids were harmless agents at the wrong place at the wrong time, or do you think all of these videos kind of paint a different picture? Let us know in the comments or on Twitter at @WhatsTrending.

VIDEO: Kid Belting “Panic! At the Disco” At Karaoke Is Life Affirming