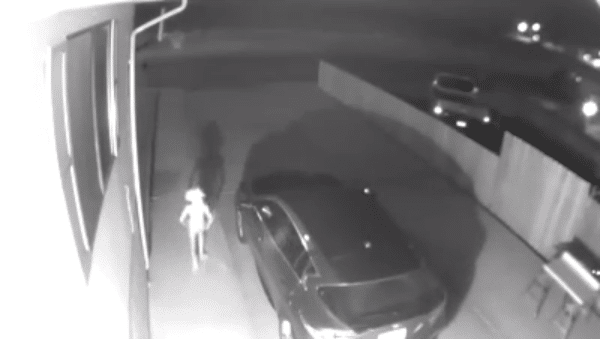 There are plenty of creepy “hidden camera” sights on the Internet, but this one might just take the cake.

Facebook user Vivian Gomez posted a video late last week from a security camera outside her home. All seems fine at first, until a small mystery creature decides to stroll up past her car and towards the street.

a lady posted this and said she saw this on her home camera this morning. what y’all think this is ? pic.twitter.com/L98wckn6bO

On her post, Gomez said “So I woke up Sunday morning and saw this on my camera and am trying to figure out…what the heck??”

She continues, “First I saw the shadow walking from my front door then I saw this thing….has anyone else seen this on their cameras?? The other two cameras didn’t pick it up for some reason.”

Everyone has a theory about what the heck this thing in the video is. People have compared it to an alien or a gremlin, and some genuinely think it is one.

Most people have jumped to the assumption that the video is fake. A few commenters speculate that it’s probably just a little girl with shorts on her head (a bit weird, but hey, kids can be like that).

Most people have had a laugh with the whole thing, drawing quick comparisons to a beloved Harry Potter character.

Everyone saying this is fake because he disappears in the last frame is wrong. OBVIOUSLY DOBBY APPARATED OUT OF THERE. https://t.co/UguBeSsvSm

dobby walking out of the malfoy manor to warn harry pic.twitter.com/ZgZT3GafWS

Y’all are so dumb just because Dobby died in the movie doesn’t mean Dobby the actor is dead in real life! Gosh some people don’t understand how movies work clearly #dobby pic.twitter.com/uGPq90t6YA

Gomez hasn’t said anything to reporters yet, so until then we’ll just have to keep guessing what it really is in the video.

What do you think this floppy-eared creature is? An alien? A house elf? A kid wearing their pants wrong? Let us know in the comments section!

Gwyneth Paltrow had NO CLUE she was in Spider-Man??