Ever wondered how residents of one of America’s most conservative towns would react to a protestor with a Black Lives Matter sign on their street? One YouTuber took matters into his own hands and found out.

Black Lives Matter protests have been occurring in all of America’s major cities and around the world in the wake of George Floyd’s murder in late May, but how has small town America been reacting to the movement? How about if the small town is headquarters of the KKK?

In a video published two days ago, Rob Bliss, a white man who makes viral marketing campaigns for companies such as P&G and Motorola, put together a video displaying obvious racism that is commonplace in the town the video is set in. He went to Harrison, Arkansas, a place Bliss referred to as “America’s most racist town” and held a Black Lives Matter sign on the side of a busy street and recorded people’s reactions.

Harrison, Arkansas has an extremely racist past and present, as the town is now the headquarters of the Knights of the KKK, a faction of the Ku Klux Klan, and they continue to boast a large following of supporters. Concerning.

In Bliss’s 2 minute and 18 second video, he edited together most of his interactions from the day and *shockingly enough* the town’s residents didn’t react well to the Black Lives Matter sign or his presence outside their Wal-Mart or on their streets.

Bliss was threatened, cursed at and yelled at numerous times throughout the video, and local people even tried to caution him about his own safety, telling Bliss he “wouldn’t stay after dark”.

The video is very unsettling to watch, especially seeing people come at Rob for this statement that really shouldn’t be politicized. The matter of racial inequality deals directly with human rights, and this video represents how far society has to go in order to achieve the goals of equality.

Following the publishing of the video which now has over 600 thousand views, Bliss is facing backlash and has now started a Go Fund Me page where he said, “I released this video exposing what it’s like to hold a Black Lives Matter sign in America’s most racist town. While filming I received several threats of lawsuits by racists who would sue if I ever released this video. I am desperately in need of retaining a defense lawyer to protect both the video and myself from legal action. These funds will be used to support and protect my activist work.”

This video does end on a positive note though, as the only person in the video who was blurred out for privacy reasons, hands Bliss a note telling him to stay hopeful. 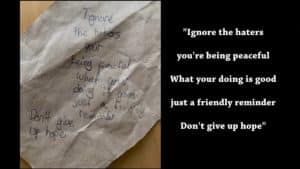 This video has gone viral on the Internet and users online have had a lot to say about what they saw in the downright shocking display.

I’m sorry you had to go through so much ugliness! I’m so glad for the young person at the end, that note was awesome! Please stay safe!

At the end of the day, it’s hard to believe that there is such a stark difference in red and blue America, and it’s no surprise that this video went viral and gained so much traction based on the shock value of it all. Let us know what you think about this! What surprised you?