Well, this is fun… we think. Or maybe it’s unbelievably sad. Whenever we write about Azaelia Banks she’s either in an odd confrontation where eye witnesses say she is largely to blame, or in some strange and questionable situation of her own, such as this run down of her surreal time running through the drug addled psychosexual home of Elon Musk. Now, all of us on Twitter have a sad front row seat to Azaelia Banks’ latest conflict, that with Lana Del Rey.

Azaelia earlier insulted Lana Del Rey on Instagram stories for her criticism of Kanye West’s MAGA leanings and his statements that noted alt right conspiracy theories and hinted that the 13th Amendment, the amendment abolishing slavery, was not good. You know, kind of safe opinions to call out. However, Azaelia Banks ended up going off on Lana Del Rey, some examples of which can be seen below. 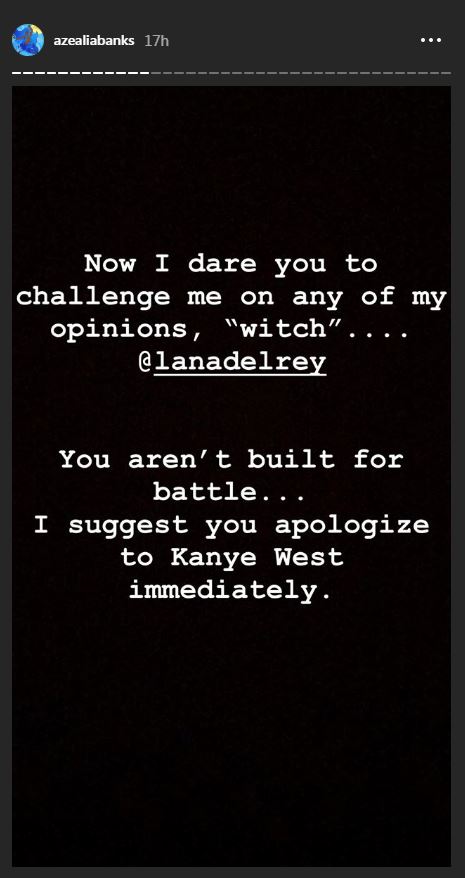 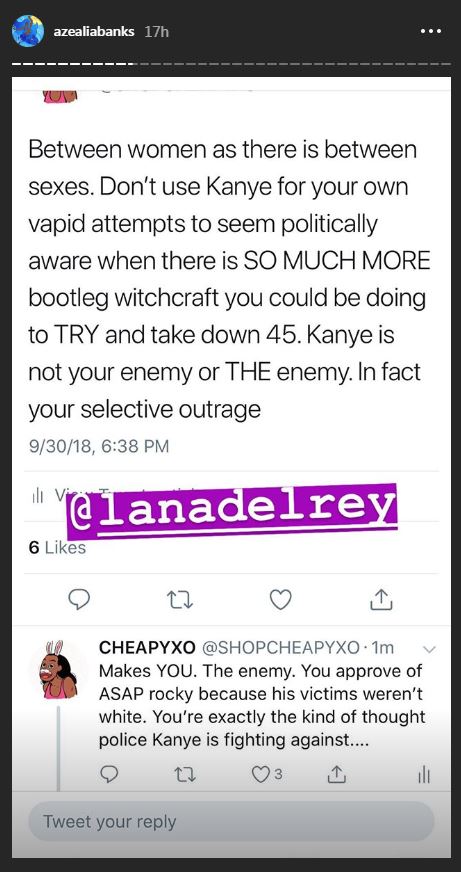 Well. Lana Del Rey didn’t take this grade A level BS sitting down, and proceeded to get back to Azaelia Banks on Twitter in Tweets that had people clutching their pearls, spitting their drinks and other such actions we do when are taken by the shock of a fight that is, for all intents and purposes… quite exciting!

@shopcheapyxo u know the addy. Pull up anytime. Say it to my face. But if I were you- I wouldn’t.

I won’t not fuck you the fuck up. Period.

Banks. u coulda been the greatest female rapper alive but u blew it. dont take it out on the only person who had ur back.

Azaelia Banks tried to get back on Twitter by making fun of Lana Del Rey’s looks which well… I mean, whose side would you want to be on? Lana Del Rey then drove a final delivering blow to Azaelia Banks which was… also weird. This whole thing is weird. Violence and threats are weird. But it’s exciting to see drama go down, so let’s watch some drama go down! Also, Azaelia Banks was gross and started this because someone expressed an opinion she didn’t agree with so… let’s go!

Azaelia Banks has more replies on Twitter, but they’re all too depressing and dirty to post here. It’s just… Azaelia Banks is gross and weird? And saying the meanest thing imaginable doesn’t put her in the right but just makes her look like a jerk? Oh well. I can’t wait to post the next sad Azaelia Banks story for all of us to peruse.

What did you think of the fight? Let us know in the comments or on Twitter at @WhatsTrending.