Really...they said that
By Stephanie Makri

Burger King’s chain division in the UK highlighted gender inequality in the restaurant industry through a controversial Tweet posted on International Women’s Day. The tweet stated, “Women belong in the kitchen”, immediately grasping people’s attention online as the sexist undertones were evident. The initial purpose of the statement was to promote their new scholarship program which would attract female chefs and help them chase their culinary career.

As the Internet began criticizing their post, Burger King added another Tweet clearly presenting their viewpoint and perspective. They mentioned the low percentage of female chefs in the industry, thus aiming to create a plan of action where the gender imbalance would diminish. In their attempt to achieve this however, they promoted a sexist opinion which harmed their brand identity. The thought may have stemmed from a positive place, but the execution boomeranged unfavorably.

The additional tweets clarified, “If they want to, of course”, hinting that the first tweet wasn’t “misogynist” as described by some, but only a way to support female chefs.

We are proud to be launching a new scholarship programme which will help female Burger King employees pursue their culinary dreams!

Women belong in the kitchen.

The backlash nevertheless was quick to hit the company, as the “Women belong in the kitchen” tweet had already caused Twitter mayhem. Users criticized harshly as well as playfully in some instances the brand’s name, referencing that the era of the King is over. Many noted that “the time of the Burger Queen has come”, hinting toward female empowerment in the restaurant industry.

Burger King had the perfect setup to go with Burger Queen for the day but chose to publicly execute their social media people instead.

Bad day for the royal family, especially the Burger King

The United States based company meanwhile published a print ad using similar language. “Women belong in the kitchen” was bolded in white behind a bright red background.

“Fine dining kitchens, food truck kitchens, award-winning kitchens, casual dining kitchens, ghost kitchens, Burger King kitchens. If there’s a professional kitchen, women belong there.” The ad continued, “But can you guess who’s leading those kitchens these days? Exactly. Only 24% of chef positions in America are occupied by women. Want to talk head chefs? The number drops to fewer than 7%.” 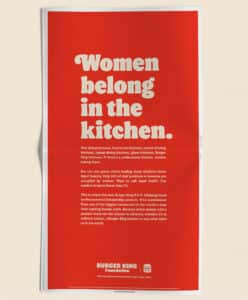 H.E.R. (Helping Equalize Restaurants) is a Burger King Foundation scholarship which will provide $25,000 respectively to two current female workers of the company. According to the foundation’s website, the requirements are to be employed at Burger King or a franchise, plan to enroll in a two-four culinary year program or university in the United States during the 2022-2023 academic year, have a high school diploma, show financial need, and have notable work experience. Similar programs will be put forth in the UK and Mexico as mentioned by Burger King spokeswoman, Adrianna Lauricella in an email.

She continued to say that the company’s goal is to “help women break through a male-dominated culinary culture”, implying that women are significant for the industry’s advancement. She went on to talk about the tweet which exploded in the UK saying that the purpose of it was to draw attention to the fact that women chefs hold a very small percentage in comparison to males. Lauricella admitted that it was a mistake not to include the full explanation behind the statement in the initial tweet, which is something which caused misunderstandings. She hopes that once people read the full declaration, they will understand the importance of such an opportunity for women.

In response to Burger King’s tweet, KFC Gaming reacted with a meme captioned, “The best time to delete this post was immediately after posting it. The second best time is now.” The reply was instant with Burger King declining the idea, pointing out that the purpose is to focus on the “lack of female representation” in the industry.

Why would we delete a tweet that’s drawing attention to a huge lack of female representation in our industry, we thought you’d be on board with this as well? We've launched a scholarship to help give more of our female employees the chance to pursue a culinary career.

Though the tweet presented a provocative idea originally, the company covered up the mess by making their point clearer later on. Were they successful is doing so? You can be the judge of that.