Courtney Love wants her flowers back.
By Christian McBride

If you don’t know Olivia Rodrigo, she is an 18-year-old, actress, singer, and songwriter. Rodrigo started her public career in 2016 acting as Paige Olvera in the Disney Channel series Bizaardvark. This opportunity led her to take on the much-anticipated lead role of Nini in the Disney+ series of High School Musical: The Musical the Series. In this show, she released a personally written song called “All I Want” which soared beyond the show garnering millions of streams after the show’s debut.

After so much recognition for her songwriting abilities, Rodrigo signed with Interscope Records and Geffen which debuted her very first single in January of 2021. The song is titled Driver’s License which became a hit it landed her on the Billboard charts making her the youngest artist to debut at number 1 on the charts.

Months later, Rodrigo released her first full-length debut album called SOUR on May 21! The album has since received critical acclaim with solid reviews! The album even broke the record for having the biggest opening week for an album by a female artist in global Spotify history. Despite her recent success, Rodrigo is facing some backlash on plagiarism, On June 23rd, Rodrigo took to her Instagram and said “Since I didn’t get to go to prom, I wanted to throw a little prom party with my fav ppl (you guys obvs). SOUR prom the concert film comes out Tuesday!!!!” 2 days after she posted her film Courtney Love a pioneer in pop culture and alternative genre did not like what she saw following Rodrigo’s announcement. Love took to Instagram on June 24th, posting a screenshot of Olivia’s “Sour Prom Concert Film’s’ cover art with a caption “Spot the Difference! #twinning.”… basically blatantly saying the young singer copied her.

Rodrigo politely replied to the post saying “ “love u and live through this sooooo much.”… which didn’t make Love too happy as she seemed to want an apology or at least acknowledgment…. To this, love replied- “Olivia—you’re welcome. My favorite florist is in Notting Hill, London! Dm me for deets! I look forward to reading your note!”

Love didn’t only go to her Instagram she also went to Facebook (where the OG’s roam) to express to her aged fans about the young pop star stealing her art. Fans are also speculating that Love was inspired by the 1976 film “Carrie” which looks very similar to her album cover as well. 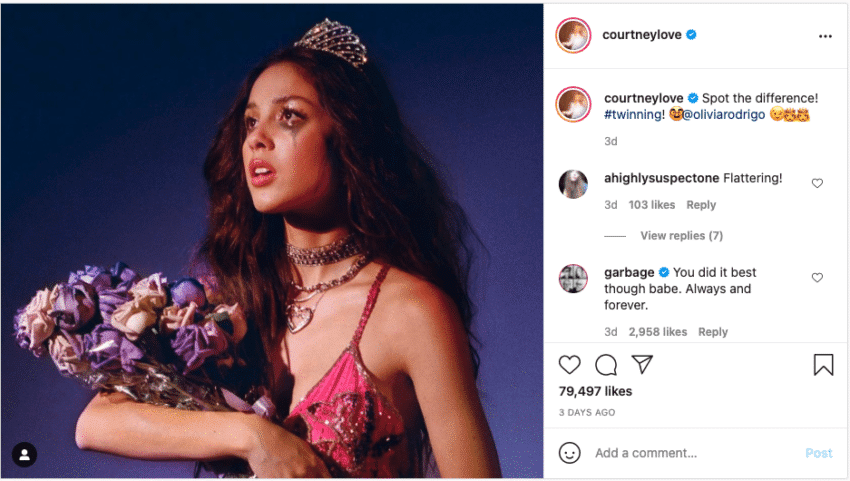 To this, people are sharing their own opinions! One comment on how “Courtney love did not invent smeared mascara and prom she deserves nothing”

while another tweets “this is kind of ridiculous”.. Pointing out how the look has already been done before…. referring to the scene from Carrie- that most people are saying Rodrigo ACTUALLY took inspiration from.

Someone call Carrie so she can weigh in on this whole Courtney Love vs. Olivia Rodrigo debate pic.twitter.com/rk6TFsSQUE

This isn’t the first time that artists have been accused of stealing visuals. Kendrick Lamar has faced accusations for one of his music videos, along with Lil Uzi Vert in his “That Way” cover art… And many… Many more. Overall, there will always be comments about what artists plagiarize in their day and age. We will let you be the judge.