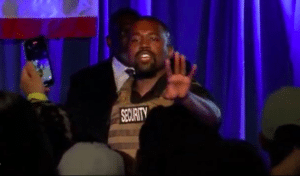 In what can only be described as a chaotic rally in Charleston, South Carolina, this Sunday, Kanye has left fans concerned about his mental health. The rapper broke down crying at his first rally held to launch his unexpected 2020 Presidential Campaign.

Wearing a bulletproof vest marked “security” and 2020 shaved onto the back of his head, West delivered an hour long rambling speech to his audience, talking about abortion and pornography and arguing policy with attendees.

He revealed that he had wanted his wife, Kim Kardshian, to get an abortion when she was pregnant with their eldest daughter, North. “Even if my wife were to divorce me after this speech, she brought North into the world when I didn’t want to. She stood up and she protected that child.”

Kanye West crying on stage at his campaign event in South Carolina pic.twitter.com/GsHAnZQG1c

On abortion, West said, “Abortion should be legal because guess what? The law is not by God anyway, so what is legality?”. However, he implied that it should be heavily discouraged saying “there should be an option of maximum increase available … Maximum increase would be, everybody that has a baby gets a million dollars“

During this rally, he also made comments that left his audience in disbelief. While talking about economic inequality West said, “Harriet Tubman never actually freed the slaves, she just had the slaves go work for other white people.” Tubman managed to escape a Maryland plantation, returning to the South to rescue other slaves and risking her life to save others.

This sparked indignation among audience members. One person who posted the video on twitter can be heard saying that they are leaving the rally after his comment.

Kanye said this and I left immediately. I went for a laugh and I got one. But when it got disrespectful for me it was over. pic.twitter.com/nNqjUp03mu

West also went back and forth with some members of the audience and a  video of a young black woman’s interaction with Kanye went viral.

Watch how Kanye West targeted a black woman at his presidential rally. pic.twitter.com/YDexNSqqth

She took to Twitter to explain the situation, saying she attended the rally and was selected to ask Kanye a question.

This is the girl who kanye west embarrassed at his rally. This man is completely against his own people he doesnt care about Black Lives dont let him fool you. He needs help pic.twitter.com/LZeFR044ST

The event was exclusive to registered guests who were required to sign COVID-19 release forms as well as wear masks and practice social distancing. In addition, West’s speech was live streamed on YouTube and clips have since gone viral on social media. While some have vocalized anger against West, others are concerned for his mental health.

People with mental health issues don’t always say the correct things all the time. It doesn’t mean they’re racist or misogynistic. Judging them on these standards of speech when they need help is cruel. We should really just encourage Kanye West to get some help with compassion.

Kanye raised concerns with his speech and his emotional state. At one point the rapper said, “Freedom does not come from an election. The freedom comes from you not loading up the pornography. The freedom comes from you not taking the Percocet.” Speaking to the media coverage of the event, Kanye said “They’re going to run this, they’re going to tell you that I’m crazy. Well the world’s crazy!”

Since the rapper was not using a microphone and there were no audience mics, the rapper struggled to be heard and repeatedly told the audience to quiet down while telling them he was “not trying to quiet their voices.” The event concluded when West was significantly drowned out by the shouting crowd.

Professor Jason Nichols told BBC that he feared Kanye’s behavior pointed towards “manic behavior.” Nichols said “He was a little more coherent than he has been in other times… when he has gone on these rants, but I really believe he is in a bad place right now. He said some really bizarre things.”

Kanye West is not well. I am not saying that in a shaming way. He has been very public about his bipolar and calls it his superpower. Fame is not a help. I can't help but believe that if he had stayed a pretty anonymous music producer he'd be in a better place. He needs support.

West’s last minute campaign has left voters confused as to whether he is genuinely running for the highest office in The United States or if this is actually a publicity stunt to promote an upcoming album. A now-deleted tweet sent from West’s account on Saturday which appears to show the song list for a new album has added fuel to the speculations.

His campaign, launched via a tweet on July 4th has already missed several deadlines to appear on key state ballots and as of now, West is only on the ballot in Oklahoma.