Actor Johnny Depp was asked to resign from his role of Grindelwald in Fantastic Beasts 3 after losing his “wife beater” libel case. His fans are left devastated and claim they will boycott the latest movie from the Harry Potter franchise.

"My resolve remains strong and I intend to prove that the allegations against me are false. My life and career will not be defined by this moment in time." – Johnny Depp

A new actor will be recast to play the villain, Grindelwald, in the latest of the Fantastic Beasts series. Fantastic Beast is a spinoff Harry Potter movie series. The third will be released to the public sometime in 2022.

Earlier today, Depp announced his resignation via an Instagram post, displaying a short typed up letter. In the letter he states, “…I wish to let you know that I have been asked to resign by Warner Bros. from my role as Grindelwald in Fantastic Beasts and I have respected and agreed to that request.”

He continues to say that he will be appealing the court’s decision to prove that the allegations against him are false. He states that his life and career “will not be defined by this moment in time.”

The post was flooded with comments of support, sad to see their favorite actor go. 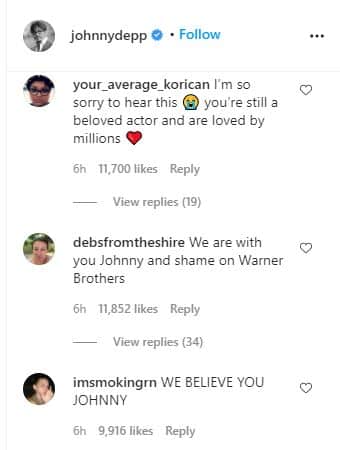 Some even gave their own opinions of the trial ruling in support of the actor. Johnny Depp supporters are claiming they know he is innocent and that his ex-wife, Amber Heard, is lying. 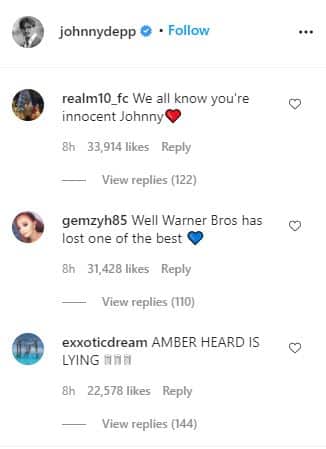 The announcement of his resignations comes four days after Depp lost his libel suit against publishers of the UK newspaper The Sun. Depp sued the paper after they printed that he had physically assaulted his ex wife Amber Heard, describing him as a “wife-beater.”

Depp and Heard were married in 2015. Heard filed for divorce a year later, accusing Depp of domestic abuse.

Depp was suing The Sun for their 2018 article entitled “Gone Potty: How can JK Rowling be ‘genuinely happy’ casting wife-beater Johnny Depp in the new Fantastic Beasts film?” Depp has repeatedly denied allegations of domestic abuse.

The judge assigned to the case stated that The Sun had proved what was in the article to be “substantially true,” finding 12 out of the 14 allegations to be true.

Despite losing his lawsuit, Depp says in his Instagram post that he will appeal and continue to fight the accusations, continuing to insist that they are false.

He also says that JK Rowling, who serves as a screenwriter and producer for Fantastic Beasts, has seen “evidence” that he has been falsely accused. Rowling made a statement defending Depp’s casting in 2017 on her website. She states, “based on our understanding of the circumstances, the filmmakers and I are not only comfortable sticking with our original casting, but genuinely happy to have Johnny playing a major character in the movies.” She ends her statement by saying, “I accept that there will be those who are not satisfied with our choice of actor in the title role. However, conscience isn’t governable by committee. Within the fictional world and outside it, we all have to do what we believe to be the right thing.” But now three years later, after the lawsuit, the casting decision might have been out of her control.

Not only are fans are devastated that the beloved actor was forced to step down from his role as Grindelwald, but many are sad to see the actor’s reputation be tarnished by potentially false accusations.

Fans are very defensive about Depp’s role and there are many that will be upset about any recasting of the villain, only wanting to see Johnny Depp.

Daily reminder that these characters are iconic and no one but Johnny Depp should be allowed play them pic.twitter.com/naelNJBvlx

friendly reminder that NOBODY can play these roles the way Johnny Depp did, get ready for both series to flop without him. #JusticeForJohnnyDepp pic.twitter.com/0Mlrws9hdx

Some fans are even planning to stop watching the series altogether. Many claim that Johnny Depp was the only reason they watched the spinoff to begin with.

He was the best thing about the franchise

Honestly he was the reason to watch otherwise I wouldn't have watched this prequel spin off.

There is even a Twitter thread going around asking to retweet to show support for the actor.

RETWEET to show your support for Johnny Depp, who will no longer play Grindelwald in the Fantastic Beasts films because he was unfairly fired by Warner Bros.#JusticeForJohhnyDepp

A lot of fans are also coming to Depp’s defense, claiming that his ex is a liar.

Johnny Depp did not abuse Amber Heard. This bruise on her face from outside of court in 2016 disappeared the very next day. Witnesses who saw Amber days leading up to this said Amber had no injury until May 27th and Johnny Depp left her days prior! Get this info out there. pic.twitter.com/VQfTZNLOId

The hashtag #JusticeForJohnny was created for fans and fellow actors alike to share stories to help defend Depp.

I’ve known JD for over a decade. Worked on 4 movies together. Our kids went to the same school.

I wish more of the actors, filmmakers & studios who benefited financially from working w him would show more public support. 🏴‍☠️#JusticeForJohnnyDepp pic.twitter.com/wfQFQQMKLB

A mass manipulator is allowed to continue her role on Aquaman but Johnny Depp must resign from Fantastic Beast? Not sure if I have seen a worse shithousery in a long time.
We know damn well who the victim was in the relationship. Amber Heard. #JusticeForJohnnyDepp pic.twitter.com/K8oSYgGCyz

Depp’s fans are truly dedicated and will never stop defending him.

RT if you still support Johnny Depp and believe him no matter how hard the media and Hollywood try to make him look like the bad guy. 🤍#JusticeForJohnnyDepp pic.twitter.com/mtbTIzU5k5

While this may be the last the Wizarding world will see of Johnny Depp, his fans are making sure his career doesn’t take any more hits. With supporters flooding his Instagram with kind messages and the #JusticeForJohnny thread coming to his defense, this is one fan base that won’t go down without a fight.

As Depp continues to fight The Sun for their allegations of physical assault, he also is suing ex-wife Amber Heard in a separate case for an opinion piece she wrote in the Washington Post. Similarly, he is suing her for physical violence allegations. Let us know what you think of all this! Are you still a Johnny Depp fan? Will you still be watching the third Fantastic Beasts film?