Women are athletes not objects
By Hailey Medina

Women are berated for wearing clothing that is too revealing, and now they are fined for covering too much — proving the problem is when women decide what they want to wear for themselves. The Norwegian women’s beach handball team faces fines for wearing shorts at the European championship instead of bikini bottoms. It turns out dress codes and attachments to modesty are quickly tossed away but, only if corporations can profit off the sexualization of female athletes for increased viewership.

In the bronze medal game against Spain, the Norwegian team wore spandex short-shorts rather than bikini bottoms to protest against the regulation bikini bottoms that made players feel embarrassed, over-sexualized, and enraged.

The current regulations state, “Women should wear a bikini where the top should be a tight-fitting sports bra with deep openings at the arms. The bottom must not be more than ten centimeters on the sides, with a close fit and cut on an upward angle toward the top of the leg”. 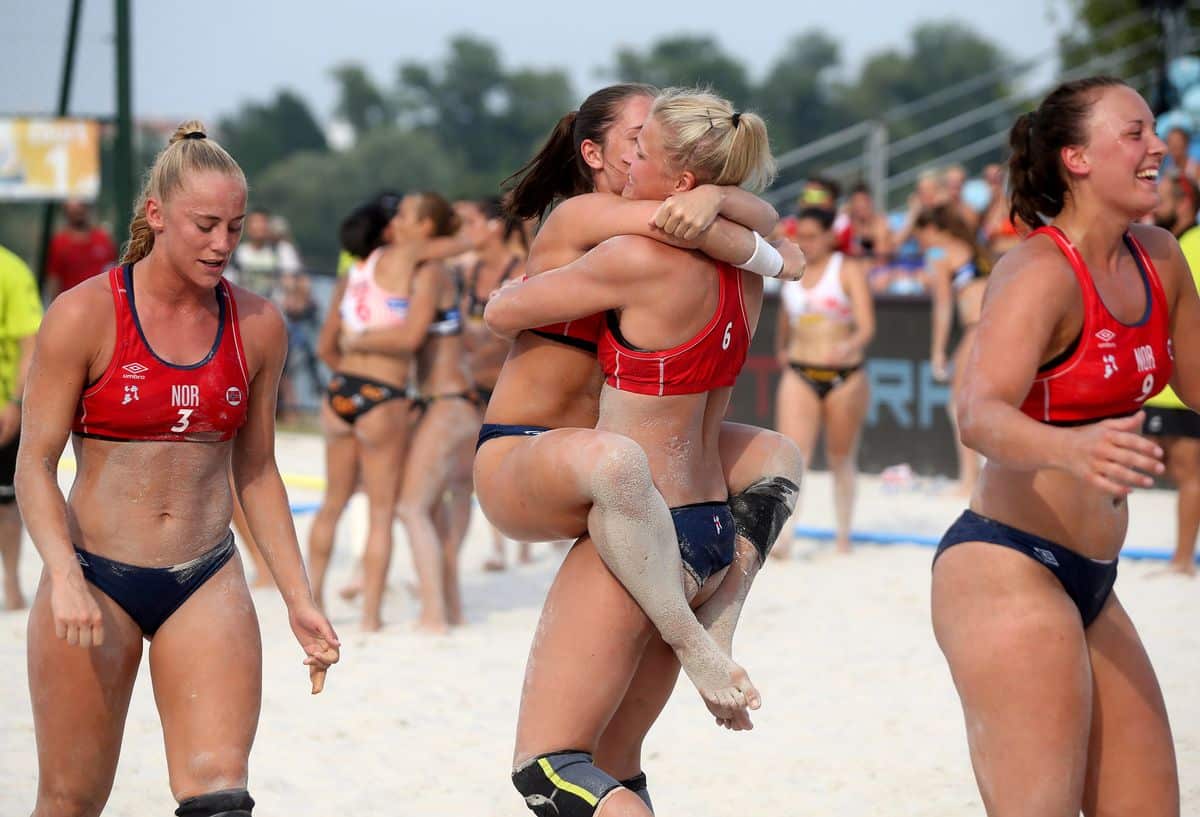 According to the European Handball Federation, the shorts worn were not according to the Athlete Uniform Regulations. Thus, the disciplinary commission imposed a fine of €150 per player, for a total of €1,500, which equals about $177 and $1,770, respectively. Although they are hefty fines, the women’s beach handball team takes them in stride as they continue to fight against the sexist regulations for all teams forced to follow the International Handbook Federation (IHF) handbook.

Norwegian player, Katinka Haltvik,  spoke to national broadcaster NRK about stepping up to the plate by stating, “Not all teams can afford to pay such fines”. After over a decade of fighting for female athlete’s autonomy over their uniforms, Norway has justifiably had enough.

The Long-standing Fight for Agency

The Norwegian Handball Federation President, Kare Geir Lio, also reached out to NRK and explained how his organization has been campaigning to change the sexist regulations for several years to no avail. Female athletes have been fighting for agency since 2006. The Blu-ray disks that started becoming available that very same year have now evolved faster than women’s say in what they can wear while playing sports.

Kare Geir Lio has repeatedly specified that in any sport, ‘The most important thing is to have equipment that athletes are comfortable with,” and “that ‘it should be a free choice within a standardized framework.’
In November, another motion will be submitted to the congress of the IHF in hopes of changing the regulations to allow women to wear clothing of their choice.

To no one’s surprise, the male beach handball players do not have the same restrictions on their uniforms and must wear “tight-fitting tank tops” and shorts “that are not too baggy” but “should be 10 centimeters above the kneecap.” These uniform regulations are vastly different from the skin-tight women’s “bottoms” if you could call them that, which must be no more than 10 centimeters long.

As a reference, the size of regulation women’s beach handball shorts that are 10 centimeters long are about the same size as a common credit card, 4 paper clips, or the height (not length) of an envelope.

Pictured below is the Norwegians men’s and women’s beach handball team side by side, and it not difficult to tell where the differences lie. 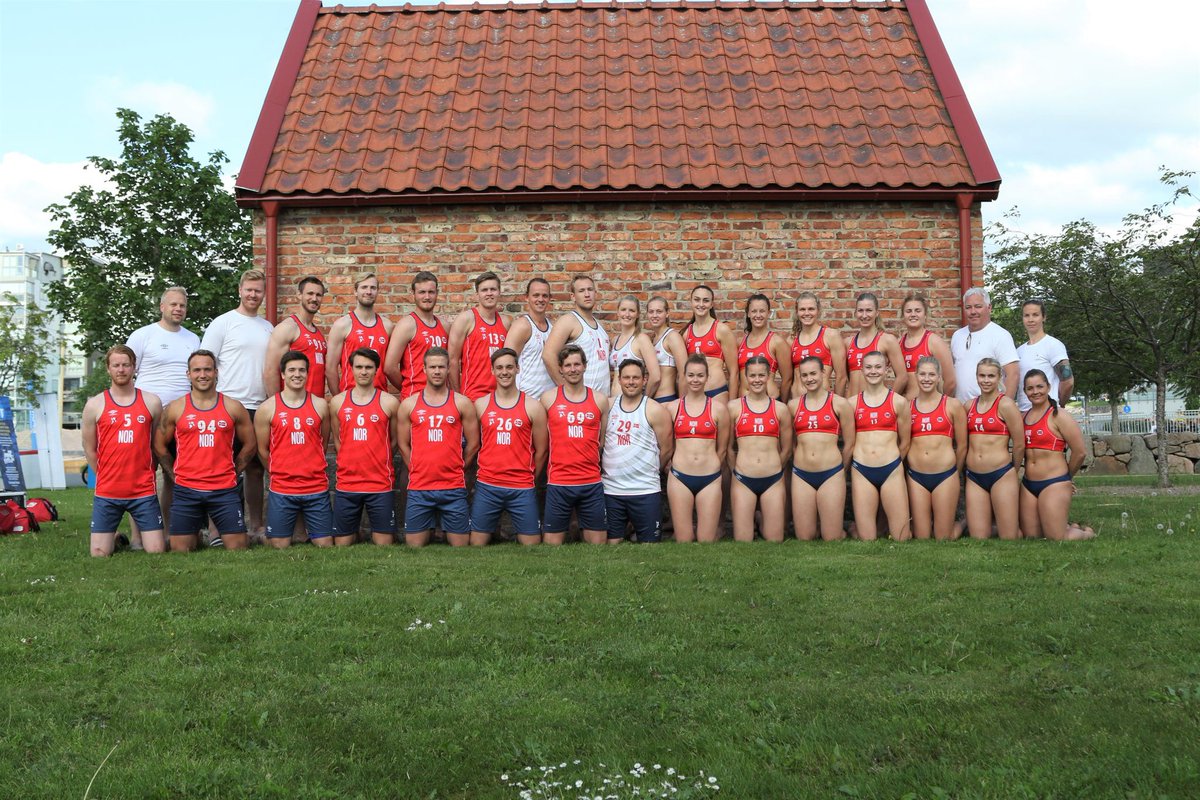 These sexist regulations are not only angering current players but are actively turning women away from the sport in general. Discomfort and over-sexualization are not something women should be worried about when playing a sport, and rather than subjected themselves to maltreatment, women are simply walking away when they know they deserve better. On top of that, fewer and fewer women are entering the sport because of the lack of autonomy. Player Haltvik is worried about the future of the sport if the regulations continue because “It shouldn’t be the case that people don’t want to take part because of the outfit”.

French national Coach Valérie Nicolas has publicly supported Norway’s stance and concerns adding, “We have lost players due to the suits. The players tell me they are uncomfortable, feel naked, and watched. It is a sport with a lot of movement, and you are hindered by the bikini. There is also discomfort associated with menstruation and not least religion.”

These statements along with years of women’s advocation for short-shorts over dental floss prove that the uniforms are restrictive, uncomfortable, and actively hinder performance during the sport. And yet, nothing has changed.
Coach Valérie Nicolas plans to continue to support Norway noting that, “To create change, nations must stand together, and we are doing it now.”

Support from the Twitterverse

Norway is currently trending on Twitter as hundreds of tweets per hour flood the platform with support for the Norwegian women’s beach handball team. Although there are always trollers teetering on the wrong side of history, many have full-heartedly supported the team against the unjust regulations. Twitter user @MakingCentsOfit highlights that even if the uniforms were made according to traditional regulations that does not mean they cannot be changed. Norms of the past must change in order to have a prosperous future and regulating women to traditional pasts is taking several steps back in the fight for women’s rights towards a more inclusive future.

Not going to lie. I never even heard of handball before the news today. I understand "rules are rules" but sometimes rules need to change. Why is this sexist uniform policy in place?https://t.co/VmfgazPiRg https://t.co/PejXwL5HUn

User @mbjorgum calls out misogyny in sports by highlighting the differences between what the women want and have to wear. Surely, the IHF cares more about the beliefs of their female athlete’s than the male viewers preference for  voyeurism … at least I’d hope so.

Today in misogyny in sports:

The organizers of #BeachEuro2021 say they will be disqualified if they do.🤦🏻‍♀️

What they wear today vs. what they want to wear: pic.twitter.com/sPLiW39Zn3

Lene Westgaard-Halle, a member of Norwegian Parliament has even turned to Twitter to show her support for the team.

Dear @ihf_info. 🤾🏻‍♀️
Can you please stop the forced bikini nonsense at your beach handball games?
It is embarrassing, disgraceful and sexist.
You are ruining both the sport and your own reputation.

As it turns out, the only people who don’t support women athlete’s right to wear what they’d like are the International Handball confederation, who are unsurprisingly the same people who profit off the ratings of half-naked female handball players. The issue is also not as simple as making the male players play in speedos because the protest was not simply to make a point — but to establish the principle. Female athletes should not be subjected to mandated over-sexualization and discomfort for the financial gain of a company — and the IHF should know better by now.