Eminem Messed With The Empire State BuIlding This Weekend

New Yorkers lost themselves... in confusion! 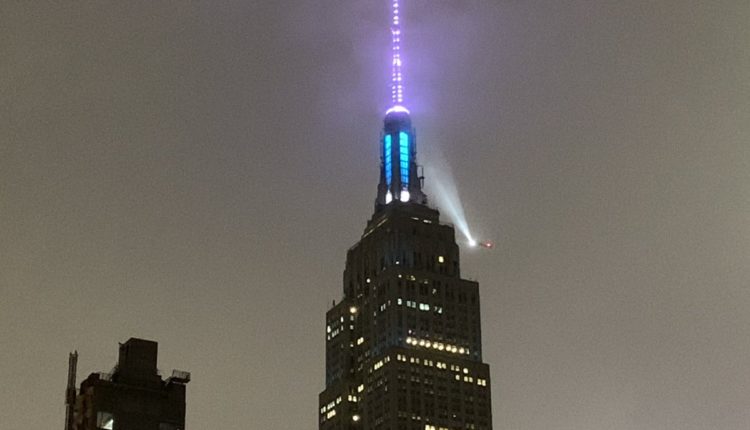 even the empire state building is burnt out from this week pic.twitter.com/nQJiRR8xxW

The citizens of New York, long used to weird sights such as Melissa McCarthy riding her podium about town, and maybe the Ghostbusters, were shocked to witness a weird light show emerging from the Empire State Building. Red, white and blue lights showing something strange and man made, leading New Yorkers to do the unthinkable — act like gosh darn tourists and look up at the sky! Boy oh boy, what has this world come to? Here’s a video of the Empire State Building have a dope time up in the sky. You can gawk and point at this vide if you’d like to really recreate the effects of it all.

Wtf is going on with the @EmpireStateBldg lights tonight? Their website says it’s supposed to be signature white, yet the lights are going crazy and flashing & waving all these crazy colors. Never seen this before! Did the Empire State Building get hacked?!?! pic.twitter.com/hPMzFOvhpz

Many New Yorkers were worried. Did the Empire State Building get hacked? We’re living in some weird ass times, so maybe this the work of prankster hackers who don’t care about the chaos they cause.

View from my apartment shows helicopters ? circling the Empire State Building. Should I be worried? if not, this noise is driving me bananas. pic.twitter.com/TQ9rbnEC9C

In the end however the only person responsible for the Empire State Building is the same guy who ends up apologizing for all the homophobia on every new syllable from his latest album, Marshall Mathers himself, Slim Shady himself, I think the cool kids call the guy Eminem, but I am not the cool kids, so I will called him “that doofed up guy who done up donked the Empire State lol”.

Evidence was found from the music video director’s, James Lareese’s, Snapchat and Instagram feed, revealing that all of the lights, to quote some other rapper, were meant for the video “Lucky You”, an ode about how… eh, life doesn’t really go the way you would like it to sometimes. However with an insane Empire State Building Shoot, maybe it’ll be about… how great everyone’s lives are now? I don’t know. Nuance is soooo 2009. I am OVER it!

The director of the "Lucky You" video has finished shooting a mystery music video for Eminem. Two helicopters were spotted circling the Empire State Building and rumours spread that Em was shooting a new video. The director posted this photo of the plans for the video. pic.twitter.com/M4zEzsbK9Z

Alright, Eminem. Now come to Los Angeles and mess with the Hollywood sign. Make it say Hollyweed again. That would, and I say this with absolute confidence, be incredibly funny.

What did you think of the effect? Let us know in the comments or on Twitter at @WhatsTrending.

VIDEO: Pete Davidson Does Amazing Take Down of Kanye Following His Rant