Blake Lively went viral yesterday after posting what we would call a good photo. Little did we know something was off. Her and her husband, Ryan Reynolds, both posted photos on Instagram with their election ballots but of course Reynolds exposed Lively as always.

It was Reynolds’ first time voting in the United States after becoming a dual citizen in 2018, as the actor is originally from Canada. The couple wanted to show their million followers they had voted early and how talented they are at drawing. As always, the king and queen of trolling put some humor into their posts.

Lively captioned, “It was Ryan’s first time. He was understandably scared. It all happened so fast.” Lively continued, “Like, REALLY fast. He wept. I pretended to weep. Then he called all his friend. #voteearly.”

It was Ryan’s first time. He was understandably scared. It all happened so fast. Like, REALLY fast. He wept. I pretended to weep. Then he called all his friend. #voteearly

In the photos that Lively posted she had some cute brown strappy heels… or we thought. Fans couldn’t help but notice there was something off with the photo and it was confirmed after seeing Reynolds post. Reynolds posted the same images revealing that Lively was on tippy toes and barefoot.

This is my first time voting in America. I’d like to thank my wife Blake for making my first time so gentle and loving. It was super scary at first, then exciting and now I’m a little tired. But proud. #VoteEarly

“This is my first time voting in America. I’d like to thank my wife Blake for making my first time so gentle and loving. It was super scary at first, then exciting and now I’m a little tired. But proud. #VoteEarly,” Reynolds captioned.

After the couple posted their photos, Reynolds also shared a story with the same image but this time with drawn on “Louboutin” booties. Lively re-posted the image on her story tagging Louboutin and asking if they were hiring, she was joking of course. She added “Barefoot iPhone doodler with vast experience avail.” 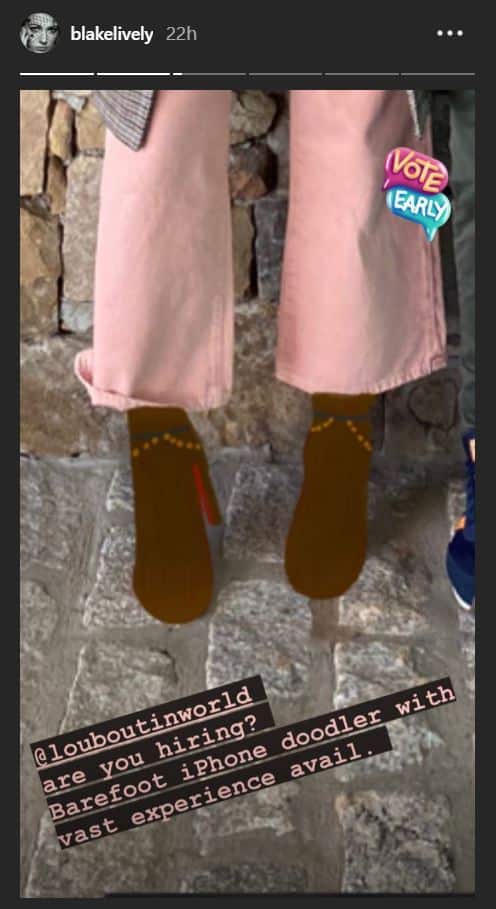 Following the Instagram story, Lively posted a zoomed in version of the original image with the strappy heels on her story and wrote, “impressive résumé upon request.” 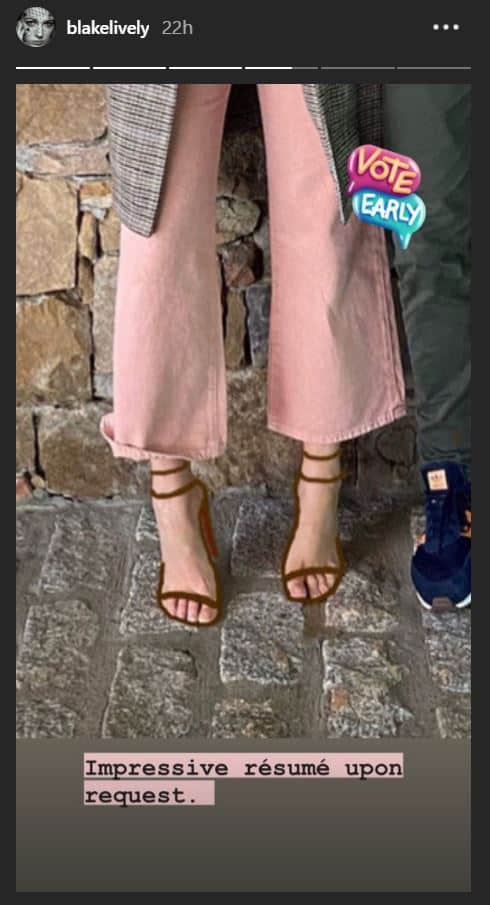 Fans were going crazy after realizing Lively drew herself some Louboutin shoes. They loved them so much they even wanted details on the “killer heels.”

The couple go way back, having a history of trolling each other on social media, or better said, everywhere. The two  have the relationship we all want, one where we can fool around and no one gets hurt. Fans who didn’t seen Lively’s post first were confused and thought Reynolds had photoshopped her shoes off. Fans thought it was hilarious.

Can we also take a minute to discuss the rest of Lively’s full outfit? She is a fashion icon ever since we can remember her in Gossip Girl. Lively has a classic style but can also rock sexy, glam, and modern while keeping it classy. Whether she’s on the red carpet or not there’s nothing she doesn’t look amazing in especially her variety of drawn on shoes.

Lively was happy to get out of her onesie and get all pampered up to go vote. “Can you tell I was so happy to get outta a onesie and vote. Sure it was an absentee drop off ballot with a mask covering my look. But dammit I exercised my right to vote. And to not wear shoes that ruined my outfit.” 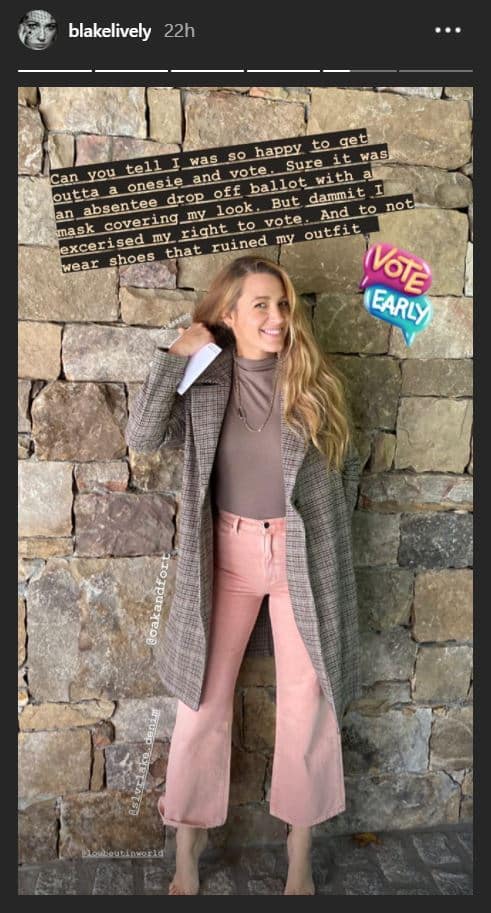 If Christian Louboutin doesn’t collab with Blake Lively and Ryan Reynolds, he’ll be missing out on some killer designs.

Ryan Reynolds and Blake Lively aren’t the only celebrities who have voted early. Many celebrities did so as well. Jennifer Aniston posted a while ago on Instagram a photo of her dropping off her ballot in the mail. Aniston was wearing some blue comfy sweats with a grey scarf and styled it with her face mask. She also announced who she voted for and had an amazing explanation for the caption.

Ashlee Simpson Ross posted on Instagram a cute photo of her “I Voted” sticker on her baby bump. Can it get any cuter? She was in all black wearing slippers.

Get out and vote! No excuses!

Will Ferrell, the comedian he is, had a video of him posted on the Instagram account iamavoter dropping off his ballot in the mail and running away with his dog.

Whether you go vote by yourself or are accompanied by your partner, voting is always a good idea. Lily Collins did so with her boyfriend Charlie McDowell wearing matching outfits. “Couples who vote together, stay together. We’re voting by mail and voting early! If you’re voting by mail in California, make sure your ballot is postmarked before Election Day and sign up to track your ballot (link in my bio!). More info in stories… #vote2020,” Collins captioned.

Ryan Reynolds wasn’t the only one with a different nationality who voted. Camila Morrone and Salma Hayek collaborated in a Instagram video where they explain how and why Latinos in this country should also vote.

Thank you to my friend @salmahayek for coming to my home to have an open conversation about the importance of our vote. The Latinx community has the power to sway this election. Let’s unite and make our voices heard @votolatino #enlalucha

The list of celebrities who have voted goes on and on but every vote counts. Now, don’t forget to vote and stay in style!