Customizable Coke bottles have returned for pride month, and they feature a new rainbow design — it’s too bad they censored the words “lesbian” and “transgender” while leaving “Nazis”. This sparked outrage on Twitter, as many other phrases, including “Palestine” and “Black Lives Matter” have been blocked from the site. Unsurprisingly, “Blue Lives Matter” remains uncensored. The banned words are blocked for being “potentially dangerous, offensive, trademarked, or belonging to celebrities”. I have personally never heard of dangerous associations with the word transgender. I’m afraid the same cannot be said for Nazis.

Coca-Cola’s selective censorship caused upheaval on social media as people began finding out about the incongruencies. Rami Ismael directed readers on Twitter to go to Coca-Cola’s “share a coke webpage” and try to type in “Palestine”. The user notes an error because, as they state, “Coca-Cola thinks Palestine is offensive [while] Israel gets no error because Israel is [deemed] not offensive”.

Coca-Cola ended its veto statement with a plea to “keep it fun and in the spirit of sharing!” This sentiment while, thoughtful, has seemed to have no impact on the users or coders of the webpage. Furthermore, it seems as if Coke allows hate groups to promote their ideologies while censoring sexualities and making money off the backs of gay consumers. Queer communities and allies support brands that align themselves with LGBTQ rights and representation, especially during pride month. However, slapping a rainbow on a product and calling it allyship is disingenuous. This clear grab for money, combined with the censorship of the very communities that Coke claims to be supporting, shows the Coke brothers only care about the LGBTQ when they can take their money.

So according to coca-cola “lesbian” is offensive but they allow you to put all this… pic.twitter.com/czGjfRmgNQ

If the webpage coders were truly focused on creating a safe and fun environment for consumers, they should have spent more time blocking hate groups with literal genocidal pasts. Twitter User @LaurakBuzz brought the antisemitic allowances to light when she found that the webpage had no issue previewing the word “Nazi”. Other users were rightfully appalled when the page allowed “Nazi Germany” while prohibiting “Jews”. This injustice of blame placed on victims rather than oppressors is too common and perpetuates hurting communities already plagued with traumatic pasts. Other users tested the censor to find these allowances and found that “Nazi” has now been blocked along with “ACAB” and “Israel”. “Nazis Rule” remains. 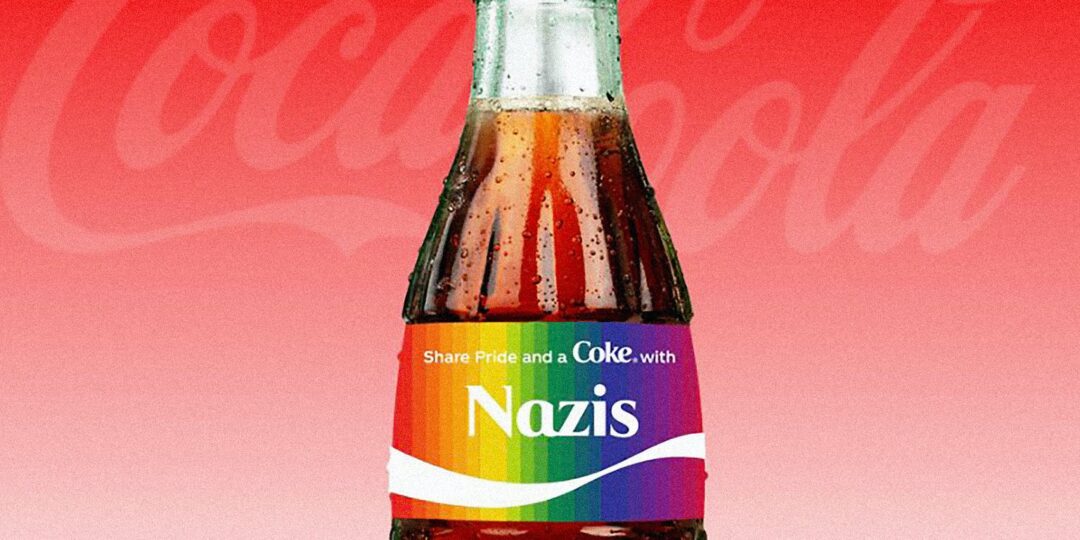 Not all users utilize the page for terror, as many customers write their names and go about their day. Nonetheless, Coca-Cola’s statement following the backlash of their problematic, selective censorship takes no accountability and ignores the claims of perpetuating trauma, allowing discrimination, and profiting off the queer community. In the process of trying to capitalize off the queer community they have jumped into twitter finger infested waters as they have managed to problematically censor a variety of communities while allowing alt-right charged words to roam free — but they’re hoping you get sidetracked by the rainbow. Pretty right? They should be so proud.