After her appearance in court on June 23rd, communities and celebrities alike have galvanized to support Britney’s freedom from the conservatorship holding her hostage. Spears’ conservatorship is a legal guardianship, giving Britney’s father and a slew of lawyers control over everything from Britney’s finances to her IUD. After over a decade of fighting for autonomy, Britney finally gains the validation and support she has been looking for as millions of fans and celebrities promote her story and vocalize their support.

In 2019, Wallet abruptly resigned, stating in court orders, “ [the] conservatorship is engaged in numerous ongoing business activities requiring immediate attention” and “substantial detriment, irreparable harm, and immediate danger will result to the conservatee and her estate if the relief requested herein is not granted”. His eye-witness account of the “irreparable harm” done to Britney has brought light to the myriad of injustices placed upon Britney. Examples of these suppressive norms include a lack of autonomy, giving Britney zero control over the money she has earned throughout her successful career, the right to remove her IUD if she wishes, or the right to get married. Britney states, “I want to be able to get married and have a baby. I was told I’m not able to get married. I have an IUD inside me, so I won’t get pregnant but this so-called team won’t let me go to the doctor to take it out.”

Citing health troubles, Britney’s father has temporarily given up his position as co-conservator to Jodi Montogomery. It is important to note this swift change of power followed a police report over an alleged physical altercation between Britney’s father Jamie and Britney’s then-13-year-old son Sean Preston Federline. A restraining order has now been granted to Sean and Jayden Federline against their Grandfather. A lawyer helping facilitate the restraining order stated, “Britney did the right thing and removed the children and took them out of there, but the trauma to the kids is nonetheless”. The altercation, along with Jamie’s convenient removal as co-conservator and Britney’s witnessed productive de-escalation of the situation, provides insight into her mental state and serves to justify her need and capability for rightful control over her life.

On June 23rd, Britney addressed open court for the first time, unveiling several cases of abuses of power, and pleading for control over her life. She compared her life to a sex trafficking victim and vilified her father, stating, “my dad and anyone involved in this conservatorship and my management who played a key role in punishing me… should be in jail.”

Within her court statement, Britney told the world how she was forced to take drugs before performing when she did not want to, she was prohibited from marrying her boyfriend of four years, and was forced against her will to keep an IUD in when she wants to have children. President of Planned Parenthood Action Fund, Alexis McGill Johnson has shown her support on Twitter stating “your reproductive health is your own — no one should make decisions about it for you.”

We stand in solidarity with Britney and all women who face reproductive coercion. Your reproductive health is your own — and no one should make decisions about it for you. #FreeBritney https://t.co/jkx5ZpOdFT

Singer/Songwriter Liz Phair also went to Twitter to voice her support stating “Oldest trick in the playbook of the patriarchy: declare a woman mad and gain control of her assets/property. Been happening for centuries”

Oldest trick in the playbook of the patriarchy: declare a woman mad and gain control of her assets/property. Been happening for centuries https://t.co/fTAs75UQQ3

Her complaints are not new, and she has been crying for help for over a decade now. In the 2008 MTV documentary Britney: For the Record, Spears argued the restraints on her life were worse than a jail sentence. She stated, “Even when you go to jail, y’know, there’s the time when you’re gonna get out. But in this situation, it’s never-ending. It’s just like [the movie] Groundhog Day.”

Celebrities Rally Behind the #FreeBritney Movement

Mariah Carey, Lena Dunham, Missy Elliott and many more have come forward in support of #FreeBritney. 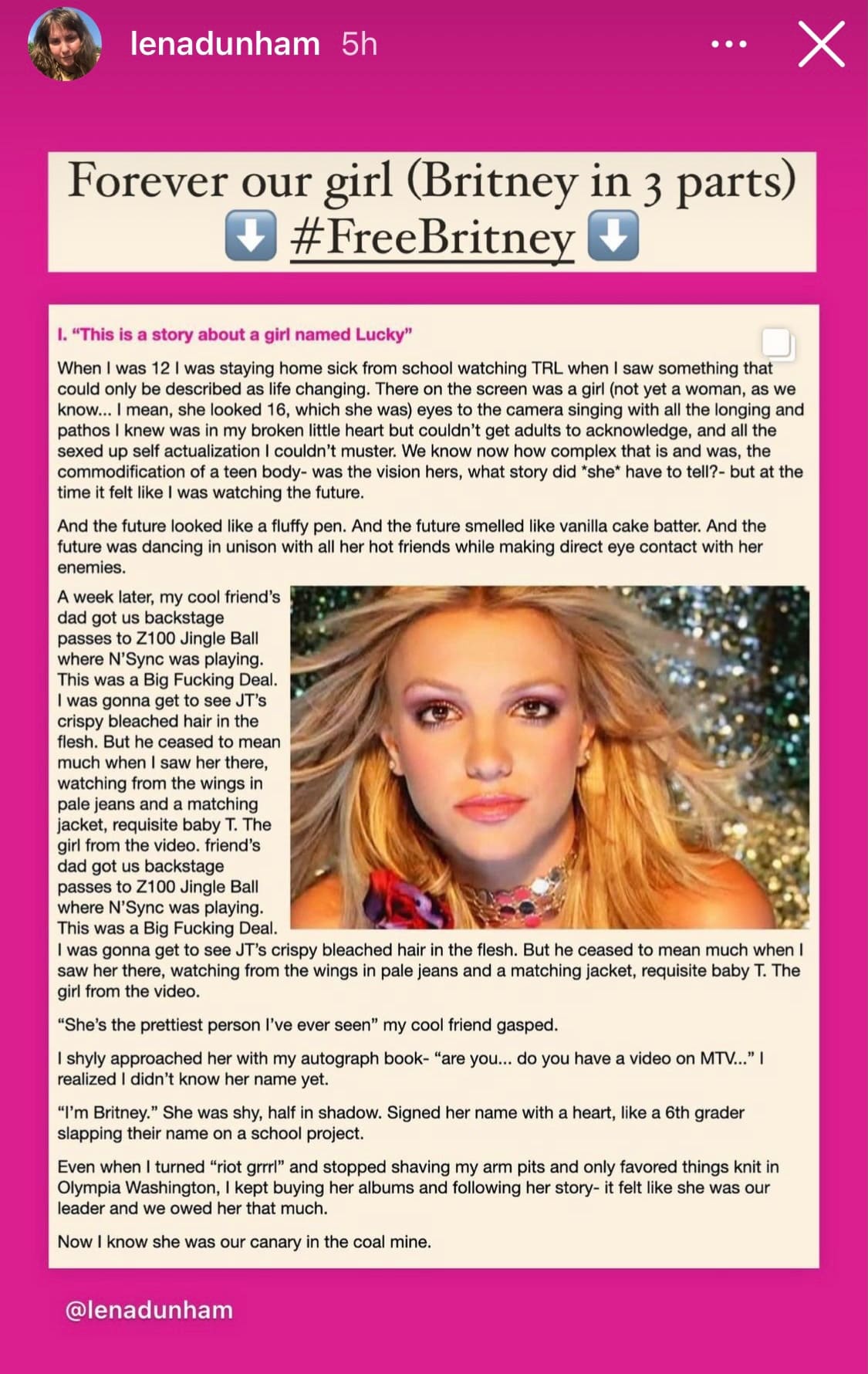 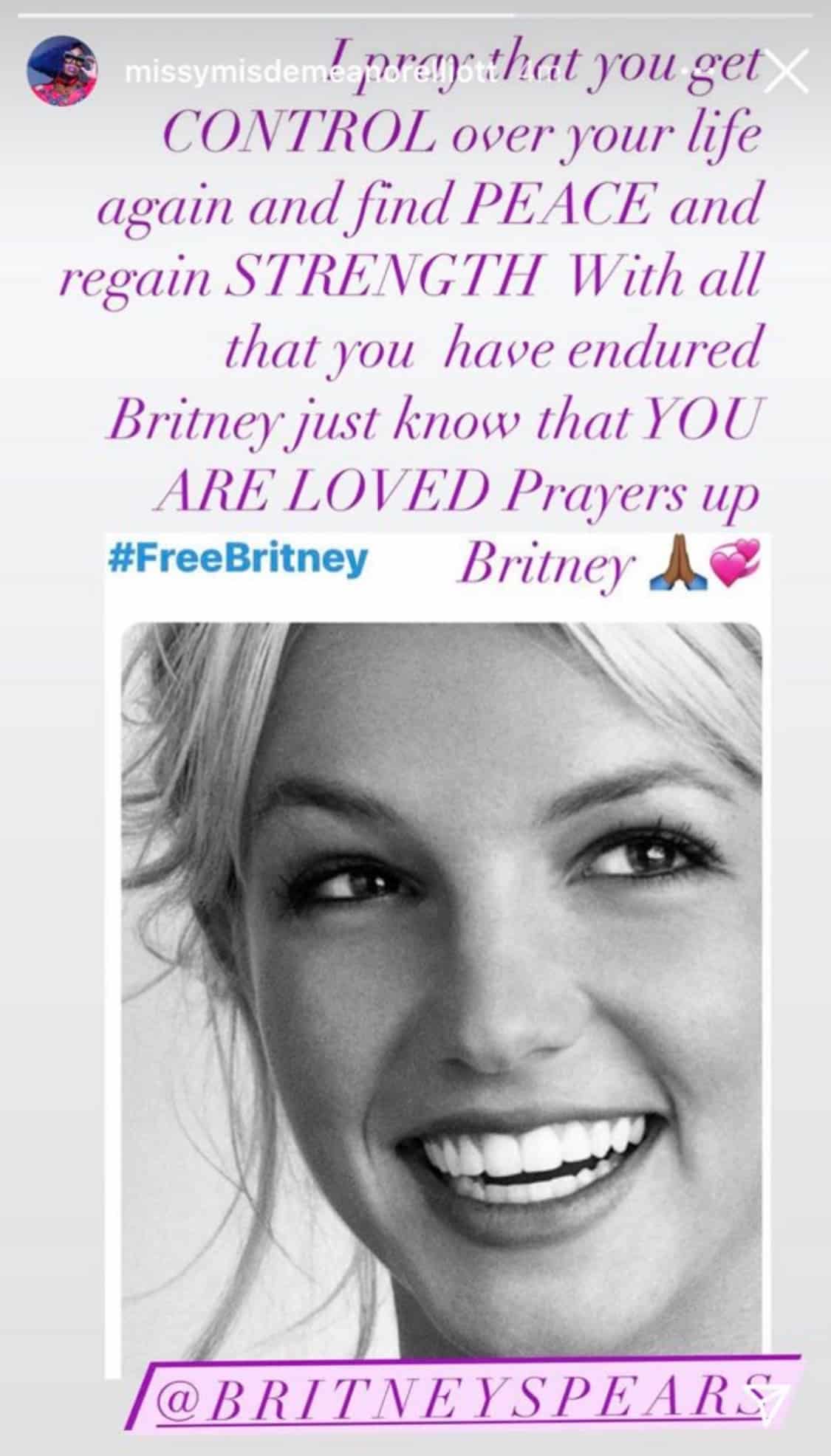 On a Sirius XM radio show, Paris Hilton told Andy Cohen that Britney should have control over life. “I love her so much and I just feel if you’re an adult you should be able to live your life and not be controlled.” On The View, as well as on her personal Twitter account, Meghan McCain has been a vocal supporter for Britney’s safety — even calling out the FBI.

Meghan McCain calls for the @FBI to extradite Britney Spears from her home and remove her from the constraints of her abusers. #FreeBritney pic.twitter.com/4Z6MvzkTxR

I mean this with absolute sincerity and not hyperbole – is Britney Spears safe right now? This very second. The people who did this to her are psychopaths and could very well retaliate against her for speaking out. This is a real time crisis that can’t wait for another court date

Jon Bon Jovi argued against Britney’s oppressors stating, “She was a girl, so [the public] took advantage of that. Forget the conservatorship.” While Brandi, Halsey, Justin Timberlake and Cher use their platforms on Twitter to raise awareness and give support to Britney.

Bless Britney and I hope with my whole heart she is awarded freedom from this abusive system. She deserves it more than anything. I admire her courage speaking up for herself today.

Additionally, fuck anyone who thinks they have the authority as an institution or individual to control a person’s reproductive health. #FreeBritney

After what we saw today, we should all be supporting Britney at this time.

Regardless of our past, good and bad, and no matter how long ago it was… what’s happening to her is just not right.

No woman should ever be restricted from making decisions about her own body.

Tons of other celebs including Rose McGowan, Crishell, Jesse Tyler Ferguson, and Keke Palmer have also taken to Twitter to add their support and call out the hundreds of people who allowed this the happen in the first place.

I will 1000% RIOT if Britney is not freed. We are SO PROUD of you @britneyspears! Listening to her call is equal parts heartbreaking and infuriating. #freebritneyNOW
and then change the laws
#FreeBritney

Got y’all asses!! ITS OVER #FreeBritney crazy mfs

The plethora of support will hopefully aid in Britney’s freedom from her conservatorship that has lasted for over a decade. She is a mother, a performer, and an icon that deserves autonomy over her body and her future. She stated it best when she said, “I just want my life back”, and after everything she has been through she deserves nothing less.