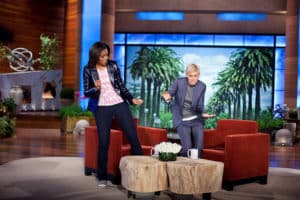 The Ellen show preaches kindness, but stories from former employees expose the show’s behind the scenes toxicity. 2020’s “cancel” culture is exposing abusers of all sorts, and Ellen DeGeneres is up for review.

The former employees’ stories of racism, fear and intimidation lead us to question the authenticity of the show as well as Ellen, who has shaped her brand off of kindness.

BuzzFeed News spoke with one current employee and 10 former employees, all of which recounted similar stories about being fired for taking leave (due to health or family circumstances), as well as microaggressions in the workplace and a general attitude of unkindness.

The show’s three executive producers, Ed Glavin, Mary Connelly and Andy Lassner, have been primarily cited for normalizing the abusive work environment, although some still blame DeGeneres. “If she wants to have her own show and have her name on the show title, she needs to be more involved to see what’s going on,” says a former employee.

This is also not the first time DeGeneres has been called out for her mistreatment of employees. A former security guard of DeGeneres, Tom Majercak, spoke out in May about his boss’s cold attitude towards him. Even guests have noticed the host’s unkind attitudes towards others.

In light of 2020’s “cancel culture,” many people have taken to social media platforms to expose unacceptable behavior. We saw a lot of this “exposing” and “calling out” during the peak of the Black Lives Matter movement as a way to uphold accountability. The exposing trend was also used to spread awareness about sexual assault and abuse. Many college students took part in this trend by creating Instagram accounts exposing sexual assaulters and abusers on their campuses.

This form of accountability has reveals different types of abuse and the normalization of it, which relates back to DeGeneres. Although she has not been “exposed” for sexual abuse, the experiences that employees have shared from working on The Ellen Show have exposed how the star has been complicit to an abusive work life environment. And in the eyes of 2020’s cancel culture, that could be grounds for cancellation.