In a series of tweets this Sunday, Justin Bieber released receipts denying a woman’s claims that the singer sexually assaulted her in 2014 following his performance at SXSW in Austin, Texas.

The woman in question, Danielle, claimed that she was sexually assaulted by Bieber on March 9, 2014, after she went to his room at the Four Seasons Hotel after his surprise performance at the SXSW festival. In a since deleted tweet, she said that she had a “steamy make-out session” with the singer that culminated with him unbuttoning her jeans before he “forced himself inside” her.

Bieber responded to the allegations on Twitter saying “I don’t normally address things as I have dealt with random accusations my entire career but after talking with my wife and team I have decided to speak up on an issue tonight.”

He went on to say “Rumors are rumors but sexual abuse is something I don’t take lightly. I wanted to speak out right away but out of respect to so many victims who deal with these issues daily I wanted to make sure I gathered the facts before I made any statement.”

These were the first of many tweets that Bieber then released to prove that he was never at the location mentioned by Danielle. Here are the receipts:

In the past 24 hours a new Twitter appeared that told a story of myself involved with sexual abuse on March 9, 2014 in Austin Texas at the Four seasons hotel. I want to be clear. There is no truth to this story. In fact as I will soon show I was never present at that location.

This article from 2014 talks about Selena being there with me. https://t.co/Jr2AE0brY2

The other reason this story might say I was staying at the four seasons was because a tweet from 2014 on March 10th not the the 9th says they saw me there . This is that tweet pic.twitter.com/piTHxjajvi

However I never stayed at the four seasons on the 9th or the 10th. This person put another tweet up earlier saying they saw me at the restaurant the following night not the hotel pic.twitter.com/K4WHNRlC6k

Furthermore I stayed with Selena and our friends at an airbnb on the 9th and on the 10th stayed at a Westin because our hotel reservation at LÀ Quinta and not the four seasons was messed up. Here are the receipts for the hotel on the 10th pic.twitter.com/hLNHnvJ6XS

On march 10th selena left for work and I stayed at the Westin as the receipts clearly showed with my friends nick and john before I left town. Once again not at the four seasons. We booked it for a couple days to stay for the defjam show but I bailed on the 11th to head back home pic.twitter.com/Ku15SCYz91

He finished the series of tweets writing “Every claim of sexual abuse should be taken very seriously and this is why my response was needed,” he wrote. “However this story is factually impossible and that is why I will be working with twitter and authorities to take legal action.”

Bieber is yet to respond to these allegations and many fans have stood by him saying that these receipts are proof that he is innocent. Others however have stood with Danielle and vocalized their support for her.

A now-deleted account who claims to be Danielle has since tweeted an apology saying that the allegations were just a joke. It however remains unclear if this was tweeted by the same woman that accused him or by a troll account. 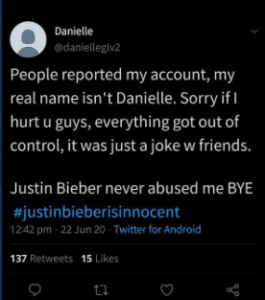