This is... interesting...
By Gabrielle Fiorella

The “Like A Virgin” singer posted a concerning TikTok right before the Grammys on Sunday, and fans were immediately concerned for not only her well-being but her appearance. With her song, “Frozen” ft. Sickick as the audio, the 13-second video consisted of the singer rocking back and forth in front of the camera from a full view of her black sheer shirt, long blonde hair in 4 braids with little clips in them, and many pieces of silver jewelry, to a closeup of her giving pouty kissy lips to the camera. The comments on the video ranged from “completely unsettling” to “Great! How am I supposed to close my eyes and fall asleep now!?”

This video from the looks of her very active TikTok account was very out of character for the 63-year-old. One fan commented “I’m just going to remember how fabulous she was in the ’90s. She was an icon.” Despite these fan concerns that she had too much work done to her face, she has yet to admit that she had any work done, work that seems to be from an intense filler.  The video also seemed to have a filter on it, with her eyelashes noticeably flickering for a few seconds and a smoky haze appearing on the screen right as the video started.

This however isn’t the first time that the singer has been criticized for her new look. 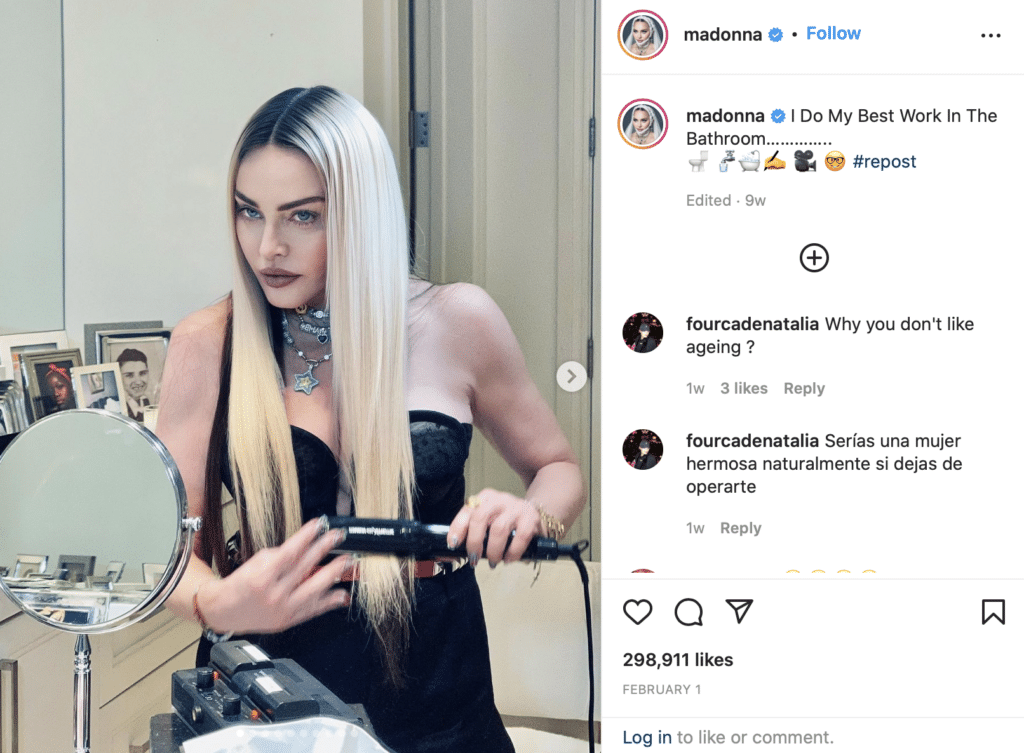 On February 1st, she posted a photo to Instagram of her in the bathroom, straightening her hair with the caption “I do my best work in the bathroom” Fans avidly expressed their criticisms in the comments, including “Stop with the plastic surgery and Botox. Your Madonna. You ruled the world once and don’t need to repeat it. Let the generation have their moment.”

A pretty harsh comment for someone that doesn’t know when to use the correct “your”. Luckily this fan tried to soften the blow of their harsh criticism by saying that she “will always be her fan.” Fortunately, when there are critics, there are always supporters. Comments such as “Too many haters and rude people on here. She definitely doesn’t need any of your approval. She’s a beautiful woman,” exhibit women supporting women and we love to see that energy all the time. With TikTok having been seen by many other musicians, some have even gone as far as reenacting it. Singer King Princess opted out of the filter for her video, and the caption read “It’s hard to accidentally serve, always.” Madonna has the right to grow and change, no one looks the same forever and we should all just leave her to what makes her happy, whatever that may be.