Pair your yolk-only omelet with special salad dressing and a Negroni sbagliato (with prosecco in it). An internet meal.
By Liza Bautista

The ‘Don’t Worry Darling’ drama will not end. After allegations from a former nanny, the internet has been clamoring to find out what salad dressing could break up Olivia Wilde and Jason Sudeikis. Wilde gave them what they wanted.

On Monday, the ex-nanny told The Daily Mail about Sudeikis’ anger over Wilde making her “special salad dressing” for her castmate, Harry Styles. Sudeikis allegedly laid down behind Wilde’s car to prevent her from leaving.

me trying to figure out what's in that salad dressing pic.twitter.com/F49nTc1Ox8

Wilde posted on her Instagram story a page from Nora Ephron’s novel “Heartburn” which included a recipe for a simple mustard dressing in the prose. “Mix 2 tablespoons of Grey Poupon mustard with 2 tablespoons of good red wine vinegar. Then, whisking constantly with a fork, slowly add 6 tablespoons of olive oil, until the vinaigrette is thick and creamy”. 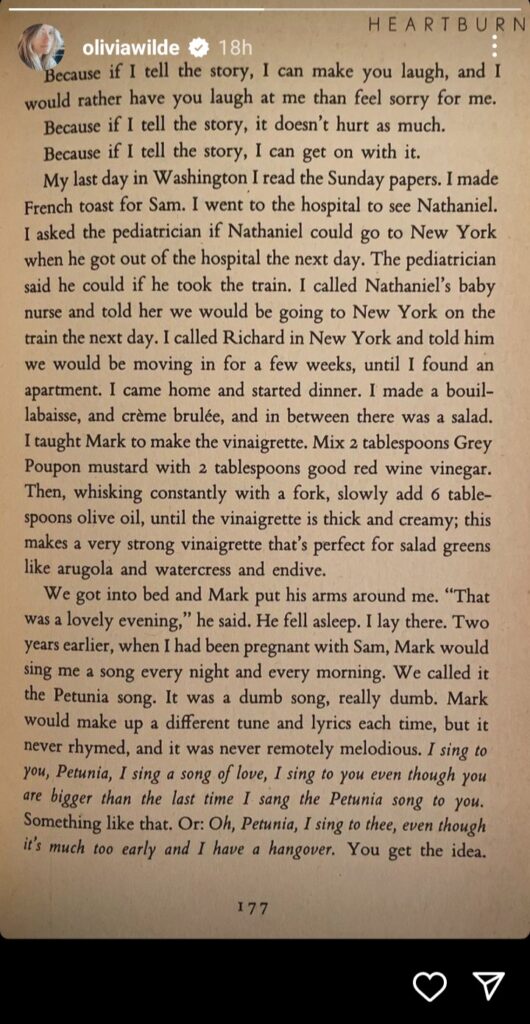 This post is odd considering Sudeikis and Wilde put out a joint statement denying the claims made by the former nanny.

“As parents, it is incredibly upsetting to learn that a former nanny of our two young children would choose to make such false and scurrilous accusations about us publicly. Her now 18-month-long campaign of harassing us, as well as loved ones, close friends, and colleagues, has reached its unfortunate apex,” reads the statement given to CNN.

While the salad dressing is incredibly simple, the source of the recipe is either a hilarious coincidence or a tongue-in-cheek response to this neverending Hollywood scandal.

if olivia wilde's 'special dressing' really is nora ephron's heartburn salad dressing……..well then that is the first time any of this has made sense

For context, Ephron’s book is based on her real-life marriage to journalist Carl Bernstein (yes, one of the reporters that broke the Watergate story!)and their divorce due to Bernstein’s infidelity.

Was Wilde poking fun at what the internet was calling the “adultery salad dressing”? Did she actually make the salad for a hungry Harry Styles? What happened to “the internet feeds itself” as she claimed during Don’t Worry Darling press at the Venice Film Festival?

It’s tough to know exactly, but the internet was having fun with the release of the recipe.

olivia wilde’s messy separation special salad dressing is from heartburn??? babe that’s like 4 layers of mess in a single instagram story i’m so sorry i ever doubted that queen

Watch as sales for Grey Poupon double this week!