So many people who have come for Shein’s neck lately. If you’re not familiar with it, we will not only be telling you why people are so upset with the brand, but detail exactly who these people are that said no to “fast fashion.”

Chinese firm Shein, the biggest retailer in the world, has come under fire over the years for their conditions on how they treat their workers and pollution on the planet. In reports over the years, people have slammed the giant for their Chinese factories where people make eighteen hour shifts and only make three pounds per garment. On top of that, there are no weekends off, the factory is a fire risk, and you only get one day of rest every month.

These findings came out in Untold: Inside the Shein Machine and have also come from everyday people doing their own research.

One influencer said that after watching this documentary, she knows how wrong and underpaid these workers are being treated.

Inside The Shein Machine. I urge everyone to watch it🫶🏼💗 #fyp #insidethesheinmachine

This movement has gone so far across social media that people have made the hashtag #boycottshein trend on both Twitter and TikTok.

The brand even came under fire when there was a swastika necklace on their site for sale with this user on Twitter more than upset about the situation.

As of lately, influencer Drew Afualo came under fire when she announced a collaboration with the brand. Back in early 2022, the TikToker seemed more than ecstatic to announce her line but was met with a ton of people not so happy.

Lmk which outfit is your fave 🤓 Shop the #SHEINX Collection & use my code “DREW” to save 15% off the entire @SHEIN US site! #SHEINpartner #fyp #xyzbca #girls #men #funny #college

BUT, Afualo defended her partnership though stating that “not everyone can afford to shop sustainably”: and that “sustainable fashion is a privilege.” And a lot of people unfollowed Afualo after this or criticized her decision to stick by the brand.

On the other hand, drag queen environmentalist @pattiegonia posted their email they received from the fast-fashion brand on their instagram. Their response? Well, they stated “I am not and never will be interested in collaborating with Shein. Shein causes more pollution in the fashion industry than any other brand on the planet. Please take me off your email list completely.”

When reached out for comment about the situation, @pattiegonia stated:

“I don’t want people to cancel Shein, but I do want people to know that the fashion industry and the way we consume are some of the biggest causes of climate change. What we can do instead is shop second hand, hit up local thrift stores, clothing swap with our friends and yes, purchase a new item or two every now and then, but when we do, purchase them from brands that care about people and the planet.” 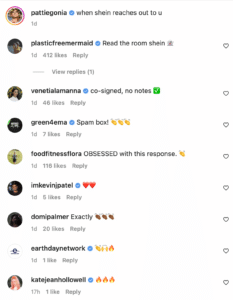 Others in the comments also expressed how some received the same email. Many believed they were getting the same outreach email from the representative. Most of which, especially @pattigonia, wanted to find the rep a job at a new company.