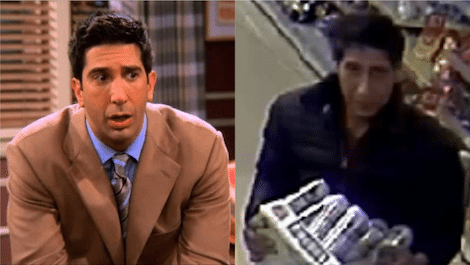 It hasn't been his day, his week, his month, and it's unlikely to be his year! Blackpool police have shared this image of an alleged thief (left!) who looks uncannily like David Schwimmer (right). Police said Schwimmer was out of the country at the time of the offence ? pic.twitter.com/fvPgt07te2

If you haven’t seen nearly anyone and everyone talking about this by now, then you must be living under a rock. Blackpool Police in England were doing their usual social media track down, by posting pictures of criminals on social media, in the hope that they will be able to catch them. However, when they posted a picture of a lager thief, people started to notice how much he looked like a certain friend…

Yep, Ross Geller was caught stealing a crate of lager, and people made sure that the right man was going to get caught by flooding the comments with his name every second. Unfortunately, the police came back and said that Ross (David Schwimmer) was actually in New York that night, so it couldn’t have been him.

Despite the many comments that came in in from far and wide, that featured obvious jokes using ‘Friends’ references, the ultimate comeback was posted when David Schwimmer posted to Twitter this video…

Officers, I swear it wasn't me.
As you can see, I was in New York.
To the hardworking Blackpool Police, good luck with the investigation.#itwasntme pic.twitter.com/EDFF9dZoYR

This guy who looks like Ross Geller robbed a restaurant and the comments have me screaming ???? pic.twitter.com/lftn0f8uoq

Seriously though, who is this guy? Is it Russ? Is it the Holiday Armadillo? Ken Adams in Mount Tibadabo? It really is a mystery.

Could there be any more Ross’ pic.twitter.com/HTYKVKqC0v

I hope that the guy doesn’t work there and was just taking his break…we all know how that went down the last time Ross told *someone* that.

Besides all the fun and games, the actual thief hasn’t yet been caught, but I’m sure he’s sat at home chuckling away at all the comments. And hey, he’s now become a viral meme which is not that common, it doesn’t happen to every guy and it is a big deal! Well, that’s what they say anyway!

Do you reckon the thief was Ross Geller? Do you think the two actually lookalike? Which Friends reference came to mind when you heard about this? Let us know in the comments, or on Twitter at @WhatsTrending.

Another White Woman Harassed People Who Were Speaking Spanish