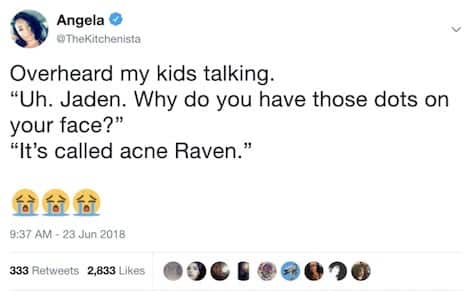 Twitter has become a gold mine for finding the most unusual tweets, that are sure to make you cry with laughter. Although some tweets sound like they should’ve been a diary entry, that not even their closest friends should’ve seen, it’s nice to know that people are able to confide in the Twitter community.

Whether it’s sharing about how much of a bad parent you’ve been, or a comment heard in passing that made you feel so trash about being single for the fifth year in a row – Twitter has it all. However, in this week’s edition of what’s become viral, people have been sharing the things they’ve overheard, which have made them question everything…

Just overheard someone say 'a rat is just an adult mouse' pic.twitter.com/fnc8WFaPOH

Let’s start with parent edition. Being a parent from our generation must be difficult. Do you share memes with your kid? Do you reference vines to them if the situation comes around? It’s so hard being the comedic generation! Anyway, these parents have had their battles this week, when they overheard what their children have been saying when they’re not around…

Kids were sitting down around the dinner table. Overheard my 6 y/o tell his 8 y/o cousin, “I am going to grow a beard so long- past my balls.” ??

Just overheard my daughter say to her baby doll: ‘Baby, I’m just having a gin, we’ve had a nice day so don’t spoil it by crying’. WHAT HAVE I DONE?!

Overheard in my house tonight:
“Mommy, Daddy, can you call the dog? He’s staring at me while I’m on the toilet!”

Overheard a kid in target to his mom

Gin baby has been through it! Not sure whether to feel sorry for her or just use gin baby as a relatable character that lives in all of us?

Another questionable conversation which was overheard in the newsroom, in which someone had a problem with the reporter coming across as too much of an otter activist…

Overheard in the newsroom: "you actually don't want to come across as pro-otter"

Seriously? What has this dude got against otters? Unless there’s an otter working in their newsroom that nobody likes…

And perhaps the most relatable one of them all…

Just overheard someone sigh dramatically and someone else respond “right??”

Ugh, literally me at all my college assignments. Is it Christmas yet?

Do you reckon these are the people of the future? What odd comments have you overheard? Let us know in the comments or on Twitter at @WhatsTrending.