Problematic Photoshoots Are Being Called Out Online

Most cannot believe that anyone would pose for these photos.
By Savannah Moss

Different racially insensitive photoshoots are being called out online recently. Posted on TikTok, an Asian woman, Maggie, called out white photographers who took photos that she calls “exploitative” of people in Chinatown in New York City.

photography can be so exploitative

Maggie, who is @cowbabyblues on TikTok, explains how the photographs of older Asian people can be of someone’s grandparents and that they should be left alone. She explains it is not the “high art” that the photographers think it is. The video now has over 45,000 likes on TikTok, with comments agreeing and explaining how photographers jump at the opportunity to take photographs of people that might come off inappropriate to those living in the communities. 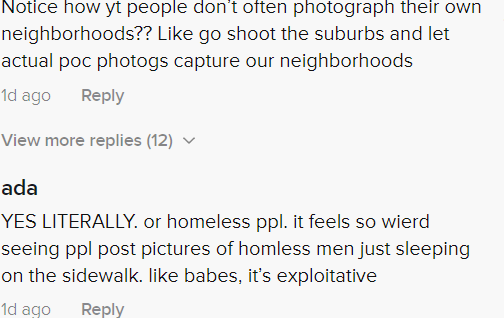 It is especially worse when the photographer does not have proper consent to take these photos. One person mentions how white people do not photograph in their own neighborhoods, but specifically reach out to neighborhoods they might deem as “exotic.” One person compared this to homeless people also, explaining how “It feels so weird seeing people post pictures of homeless men just sleeping on the sidewalk.” Many people agreed with Maggie about the inappropriate photographs some take of people without their consent, even if their intentions are not to be rude or exploitative.

Another post went viral recently of an interracial couple, whose names are censored along with the people who shot it. The photographs were inspired by the 1840s, where the enslavement of Black people was still happening. In the photographs, the Black man is enslaved and in shackles, while the white woman holds him and removes the shackles. The caption says “days passed and everything changed, our love got stronger and stronger, he was no longer a slave, he was a part of the family.”

The tweet, with over 2,000 retweets and 10 thousand likes, has many people concerned. One person wonders why a Black man would willingly take these photographs. They also questioned why the original post had so many likes. This opened up the discussion of many things, like how someone felt comfortable enough to photograph it or why someone would feel as if this is appropriate to post these photos. Though American history, even the darkest parts of it, is something that should be continued to be taught in schools and discussed online, it does not make it appropriate to dress up for wedding photos.

let’s really talk about how i never seen something like this with white men and black women. it’s always black or black-mixed men with white women