The Royal Interview Of Course Brought On Some Royally Funny Memes

Oprah interviewed Prince Harry and Meghan Markle on Sunday where they discussed the untold truths that led them about their experience in the royal family. There was a lot to discuss from the interview but first, let’s talk about the hilarious memes that flooded the internet. 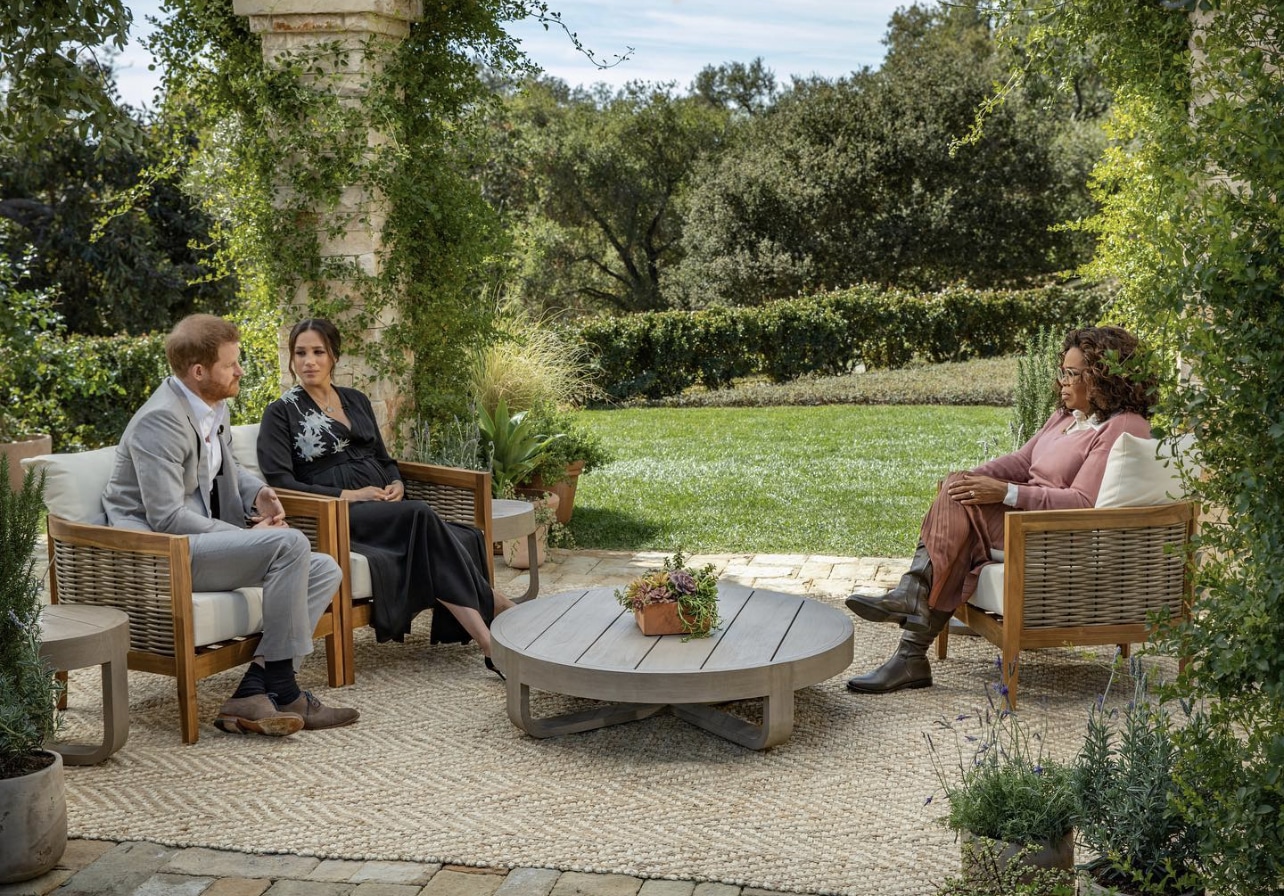 This Sunday’s interview was the most-watched non-Super Bowl Sunday primetime event in over a year. More than 17 million people tuned in to watch the tell-all. Meghan Markle opens up about a lot of things that she had dealt with like mental health struggles and even questions about her child’s skin color.
The racism that Markle faced from not only the British press but also the Royal Family shocked viewers. Many people showed their support for Markle all over social media.
Although there are a lot of memes about Oprah’s responses and facial expressions, Oprah was praised for her excellent interviewing skills. She’s spent her entire career perfecting that craft and this weekend’s interview was no exception.
Markle was very diplomatic while being interviewed. She would not name names when telling certain stories and didn’t dwell on the abuse that she endured. Some pointed out that she didn’t fully describe the abuse that she received.
There’s lots of speculation when it comes to exactly which member of the Royal Family was at fault for the abuse and racism which of course led to some memes about the Queen’s potential response to the interview.

The interview sparked tons of viral memes on social media. References to The Crown series, the Red Table Talk show, and even The Little Mermaid were included in the memes.

People joked about the Queen’s response and how she could handle it. Some made jokes about her apology posted on social media from her Notes app or address these allegations on her Instagram Live, but the most popular response was to watch the Queen on Red Table Talk.

Nah the Queen finna do a red table talk https://t.co/yyPbM8ggbt

Tell Jada and em not to go invite the Queen, Camilla and Kate for Red Table Talk.

the only way to top this is if the queen goes on red table talk pic.twitter.com/utupdl3kaB

The Queen of England has decided to break her silence on the current Megan and Harry issue and will be on the Red Table Talk with Jada Pinkett Smith this Sunday. pic.twitter.com/Vl3lrFK4oF

Meghan Markle had referenced The Little Mermaid during the interview. She spoke about related to Ariel, “I was sitting in Nottingham cottage and Little Mermaid came on. And who, as an adult, really watches The Little Mermaid but it came on and I was like, ‘Well I’m here all the time I might as well watch this,’ and I went, ‘Oh my God she falls in love with the prince and because of that she loses her voice.’
“But in the end, she gets her voice back,” Markle said.
People joked that as an adult they do watch The Little Mermaid.

I must admit that I burst out laughing at the *profound* Little Mermaid moment. But okay, okay, I’m back. #OprahMeghanHarry

Meghan…i do, as an adult, watch The Little Mermaid. 🥺😆😂 #OprahMeghanHarry

Meghan said "Who as an adult watches The Little Mermaid?" and now the Disney adults are ready to fight #OprahMeghanHarry pic.twitter.com/3LME3wNhjl

Yes…there are plenty of adults shamelessly watching The Little Mermaid.

Since the interview had lots of tea being poured, it was only a matter of time before the British tea jokes were made, right?

Y’all this is TOO MUCH PIPING HOT BRITISH TEA

ONCE AGAIN AMERICA WILL DEFEAT THE BRITISH MONARCHY BY SPILLING TEA

an American’s about to expose the British royalty. We haven’t had this kind of Boston tea since 1776

For those of you that may not know, let’s talk about spilling the tea. “Pour the tea” or “spill the tea” are popular internet slang. The phrases mean to tell the juicy gossip. It’s pretty much at the top of internet culture because no matter what you call it everyone loves some good old-fashioned gossip…well mostly everyone.

Markle also talked about going to royal human resources for help. She said that she was told, “There’s nothing we can do to protect you because you’re not a paid employee of the institution.”

It wasn’t something to be taken likely but many found that experience to be quite relatable. Also, quite shocking that they even had Human Resources.

It was devastating to hear Meghan Markle and Prince Harry reveal that Human Resources said, “we see the problem but we can’t help you.” But it was also comforting to know The Monarchy uses the same HR company as all the start-ups I used to work for.

so the HR department is useless no matter where you go

“I went to Human Resources” – Meghan Markle and also me, in my Oprah tell all about working retail

One of the smaller details of the Meghan Markle interview that I think needs to be discussed is the hilarious concept of the Royal Palace having a Human Resources.

There were even references to The Office and the HR department in the show.

Lots of people were anticipating future episodes for the Netflix series The Crown. Some noting that the writers will use the interview for their upcoming episodes.

THE CROWN PRODUCERS BETTER BE WORKING OVERTIME BECAUSE THIS IS WHERE ITS AT. THIS IS THE SEASON FINALE #OprahMeghanHarry pic.twitter.com/CJTiVrCxr5

Oprah’s reactions are definitely the star memes from the interview.

A writer for “The Late Show with Stephen Colbert,” Nadirah Simmons, tweeted out that she’s going to be using Oprah’s picture with her hands for a long time. “Please know i’m going to run this image into the ground, it’s perfect for everything lol.”

Oprah reacts to Meghan Markle revealing somebody in the Royal Family was concerned about how dark Archie's skin color might be.#OprahMeghanHarry
pic.twitter.com/V4C2FUxAVY

But with memes comes backlash and in this case, these are no exception. People pointed out that the memes were in poor taste. Meghan Markle opens up about some horrible things she had to deal with and some felt the memes were tone-deaf.

This user tweeted out that she knows people don’t mean any harm but it’s not the situation for making jokes.

I don’t love memes being made out of the Meghan interview, even if their ‘good-spirited’. This is a woman talking about how she was tormented and abused. It feels in bad taste. Be compassionate and take her seriously.

Memes are a big part of today’s internet culture. Many people found them to be in poor taste while others pointed out that this isn’t the first time memes have been made from serious situations. This is true considering there are tons of pandemic memes that at first people thought were in poor taste.