The fly on Pence’s head

The high tech plexiglas barriers in place were no match for the star of the Vice Presidential debate, the fly that made a home of  Mike Pence’s hair for two whole minutes. Let me say that again, during the VP debate a fly landed on Pence’s head, where it stayed for two full minutes right as the candidates were discussing police brutality and the BLM protests that have been going on since May.  Pence went right on with his speech defending law enforcement and condemning the looting and rioting, apparently oblivious to the fly on his head. Maybe he would have noticed the bug on his hair if he was, you know, human. Or if he wasn’t so busy desperately trying to deflect the moderator’s questions or interrupting Kamala Harris. The fly was only on air for 2 minutes but it stole the entire show. Well, I say only, but I don’t think any insect has had this much screen time since “A Bug’s Life.” Anyways, we were able to get the fly in for an exclusive interview; we asked it what it was doing at the debate and it said: 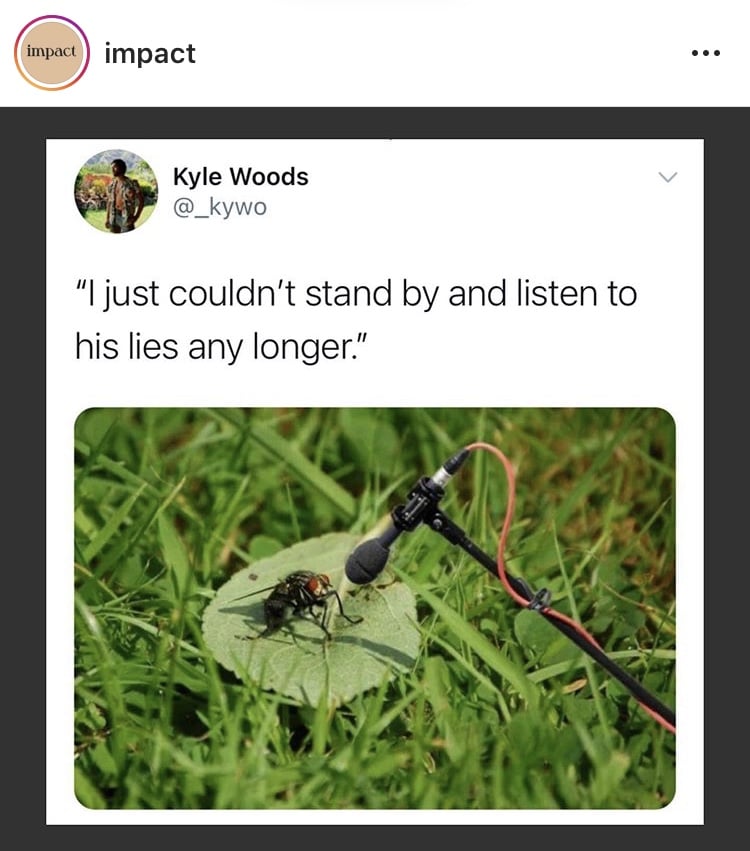 Just kidding! We tried but the fly was too busy for an interview. Though I’m sure if we had interviewed it, the fly would have behaved as perfectly as it did that day: without interrupting others, telling blatant lies, or going over its 2-minute time limit. Certain politicians could stand to learn a thing or two about maintaining civility in political discourse from this tiny unsung hero.

Thankfully, social media didn’t disappoint with the barrage of jokes and memes. There were multiple twitter accounts dedicated to the fly, and someone (accurately) tweeted “we need a rewind 0 people have been listening since the fly landed on Pence’s head.” There were those wondering whether or not Pence is made of actual human flesh, and of course there were a multitude of people eagerly pointing out that flies are attracted to decaying organic filth such as feces and rotting meat. 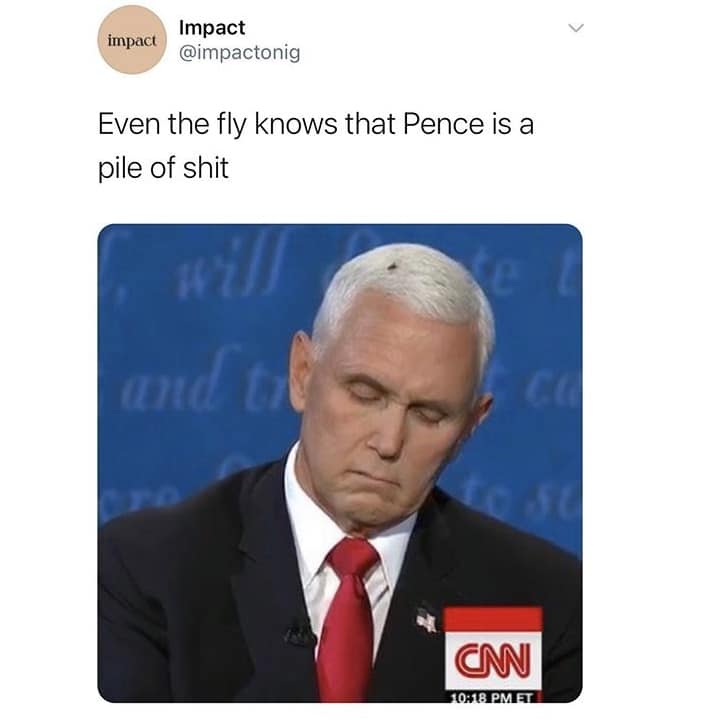 The fly also made Pence’s pink eye (which is a symptom of covid-19 just fyi) and apparent cold sore stand out more, leading to several comments that he was decomposing before our very eyes.

There were  jokes about how the fly was sent by Ruth Bader Ginsburg’s ghost.

I sent the fly.

I want him to know it was me. pic.twitter.com/J8qlzr8b8j

If that fly laid eggs in Mike Pence's hair he better fucking carry them to full term.

A lot of great art came out of this too, like this drawing of the fly holding up a Biden/Harris sign. 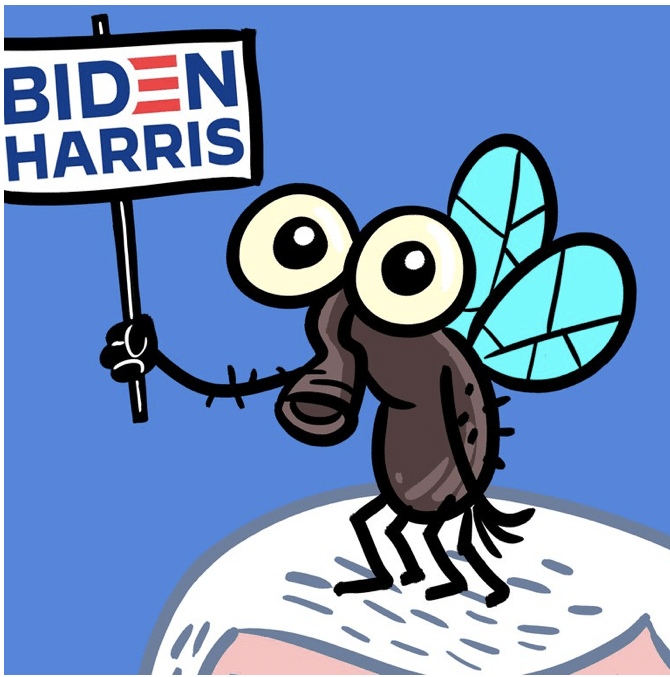 And of course Biden’s PR team wasted no time, and Biden reposted a picture of himself holding a fly swatter and asking for donations to help his campaign fly.

Biden’s campaign team  also quickly obtained the domain flywillvote.com  and  added a fly swatter inscribed with the words “Truth over Flies” to  its merchandise. I’m told it has topped over 15,000 orders.

Swats away flies and lies. Get yours today: https://t.co/ehsECKfDPO pic.twitter.com/oVLHHmq85c

Say what you will about social media focusing on the little things, but the fly on Pence’s head did more to unify the nation than many politicians. For a short but no less meaningful while, we were all looking at and laughing at the same thing. The fly on the Vice President’s head. And I think that’s beautiful.

If you haven’t heard the news as well, shoppers can now purchase the “Debate Fly Wig” in stock for $49.95. The wig, sold by 3wishes, comes with a a silver hairpiece with an attached, oversized fly that made headlines after it landed on the VP’s head and sat for a little over two minutes.

Fly on Pence wig is THE Halloween costume for 2020!! hehehehehttps://t.co/gqmTMNRo7I 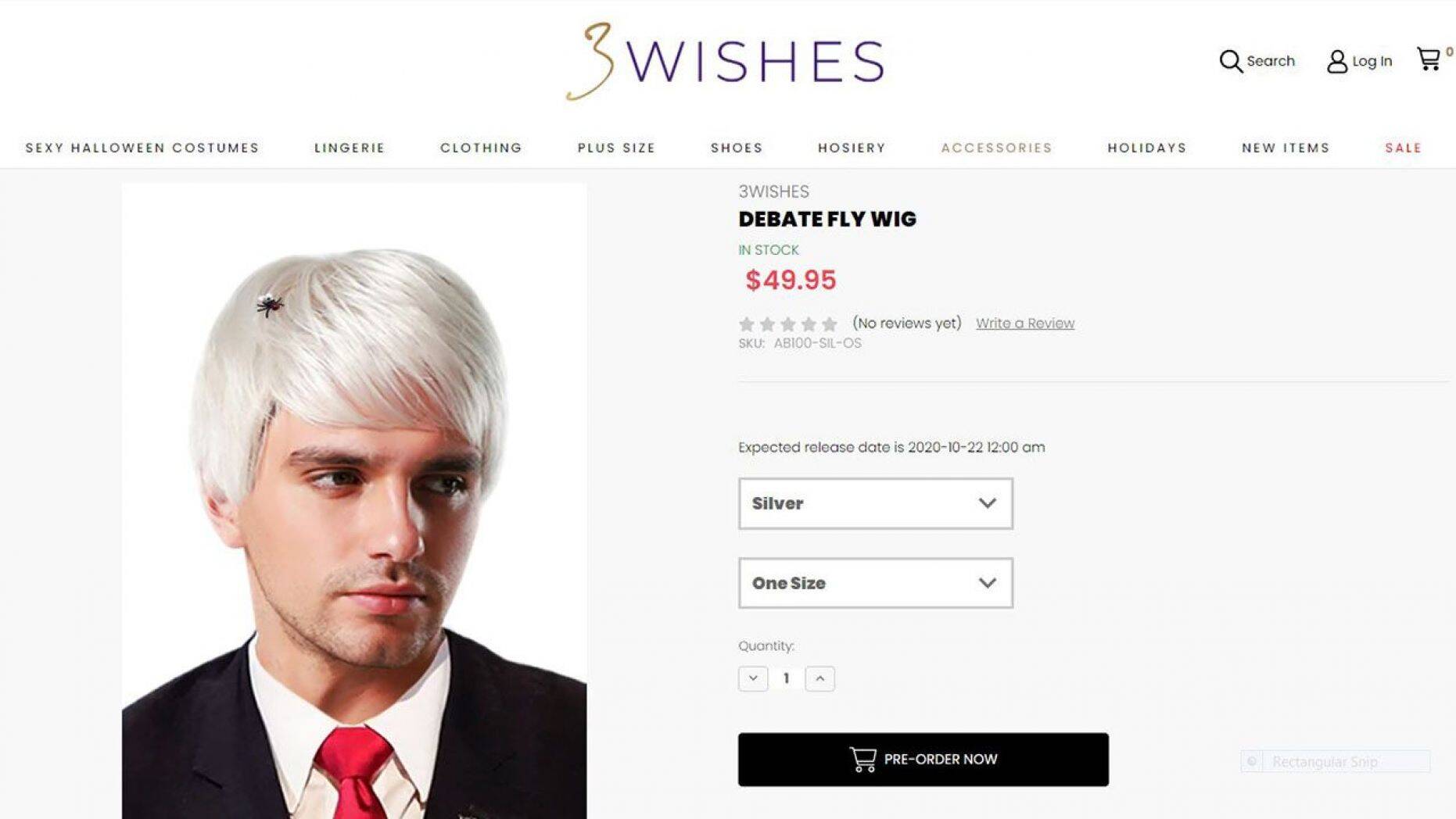