TikTok is going crazy after a video was posted exploiting racism in today’s society. An African American caregiver filmed the moment an elderly white woman she cares for spat on her multiple times.

Early today a video was posted on TikTok showing an elderly white woman physically harassing and trying to intimidate her African American caretaker as she was washing dishes. The African American caretaker, who has not yet been identified, remained very calm and continued to do her job without reacting to the harassment. Within nine hours of Novian Cherry (@noviancherry) posting the video it gained 2.1 million views, 132.4 thousand comments and 126.3 thousand shares.

In the video the white woman spat three times at her caregiver saying who was washing dishes before the elderly white woman took a bite out of some food and spit it out on her. She continued to say “You want some more,” as the caregiver would stop and look at her trying to stop and wipe the spit off her face and arm.

Since the caretaker did her due-diligence by remaining respectful to the elderly woman’s age and to her workplace by just continuing to do her job. Many of those in the comment section reacted to her classy action.

This is hard to watch. The caregiver has more grace than I could muster. Racism doesn’t die with age. Sickening.

While some thought that the caregiver was expected to deal with the situation the way she did, others showed the caregiver lots of love and positivity.

Along with all the positivity, a bunch of people are coming out saying that the elderly woman “barely has enough time to live” and that they would have “backhanded” her. The comments are in reaction to the woman remaining calm not saying a word and just going back to cleaning and wiping the spit off herself. The negative comments contradict the captions added to the TikTok videos.

Is It Possible To Create Excuses?

Some of the comments made under the post on TikTok explain that the woman is of older age and it’s possible that old habits don’t fade, especially when if that person was raised in a time when racism was not looked down upon. As society makes headway its taken that the elders don’t have to change with it even in terms of filtering what they do and say. Many of the people in the comments section argue that many elders in today’s society filter themselves as the days get more progressive.

Some comments on Titter explain that no one should be too quick to judge the elderly woman as the public does not know what physical or mental illness’s she pay possess. A Twitter comment made by @seamusdorey said that “We should not be too quick to jump to ill informed judgements.”

I think, without knowing what conditions this lady has, it's extremely difficult to pass judgement. My mother experienced similar as a carer, we shouldn't jump to ill informed judgements in this case.

Arguments in the TikTok comment section were started on whether or not the elderly White woman has dementia or Alzheimer’s. Some are stating that if the caregiver reacted she would be in the wrong because the woman may have a memory illness and the large majority who disagree are not too happy with the “excuse.” The arguments many of the people on the opposing side are making is that the woman still has no right to treat the caregiver the way she did, while also saying that there is no proof behind whether the woman has any mental illness.

What Do Others In The Same Profession Think

A few of the comments came from those who work in the caregiving field or serve as nurses to the elderly, and what they had to say was interesting. They were outraged at the situation and what the caregiver had to endure and shared similar experiences where they were verbally assaulted. Some say they have been pushed, hit, spit on and called names; However, that does not mean they would retaliate physically and verbally. On TikTok @chadbruce59, a healthcare worker added this to say: 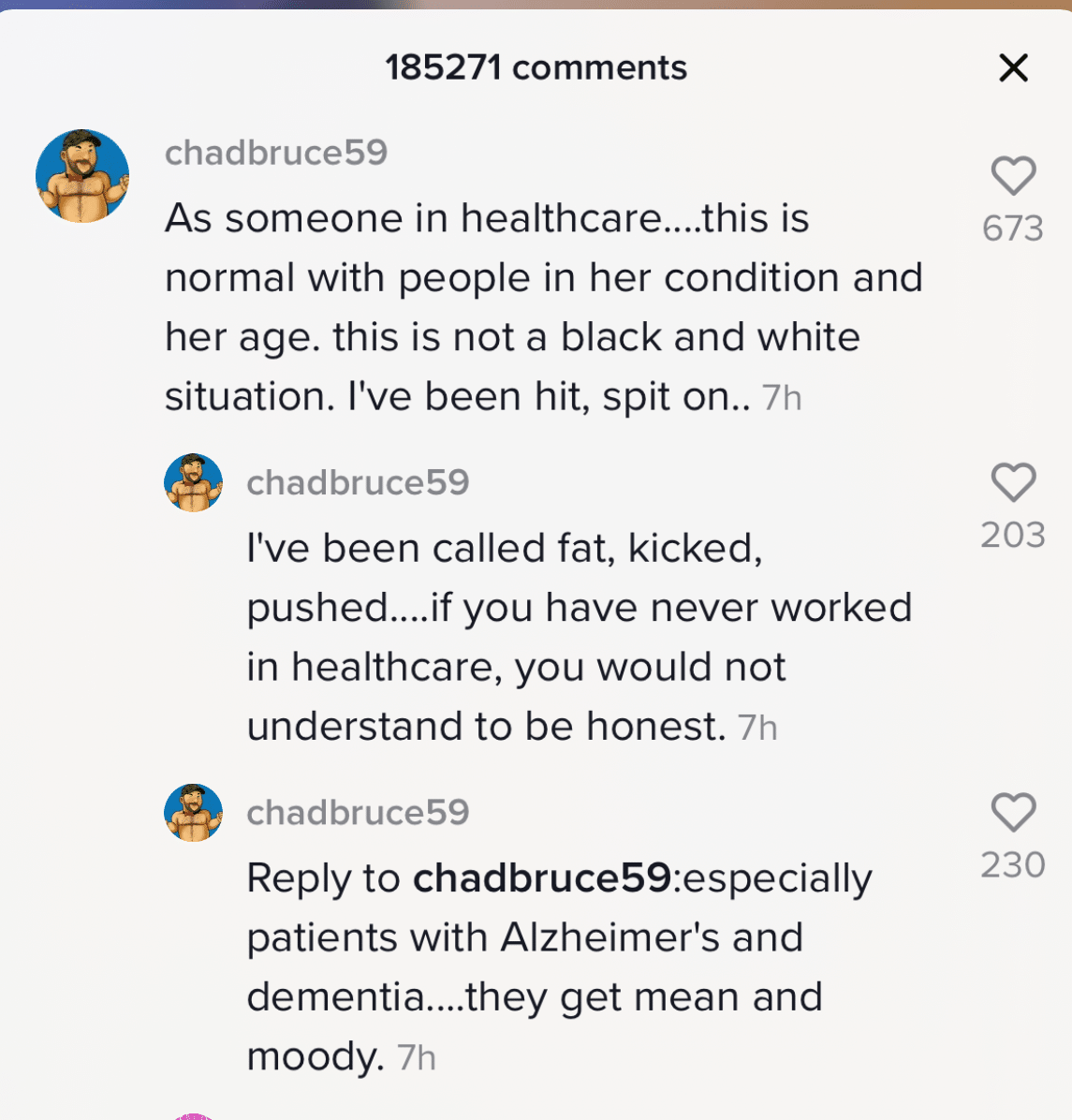 In another comment made by @mae_jal, who was a personal care assistant (PCA) for a year and a half, said that some of the elderly people that some of these caregivers have to take care of are born and raised in an environment where racism was the norm and becomes especially enticed when that patient has a memory condition such as dementia and Alzheimer’s.

Some of the social media influencers, such as Novian Cherry, are trying to find the caregiver’s social media in order to show her some positivity and love directly.