...and the internet is going crazy!

Lilly Singh is a digital creator also known as Superwoman, who has grown a loyal fanbase of over 14 Million subscribers, for which she was ranked number 10 on Forbes’ 2017 list of highest paid YouTube Stars.

She has won numerous awards including the MTV fandom award, 4 Streamys, Two Teen Choice Awards and a People’s Choice award. She’s a New York Times bestselling author for her book Bawse: A Guide to Conquering Life and has released a feature film called A Trip to Unicorn Island.

She started her own production company, she does speaking events, runs a campaign called Girl Love, which advocates for ending girl on girl hate and fundraises for Girls Education, and now she just broke the internet after announcing on Twitter that she is bisexual. 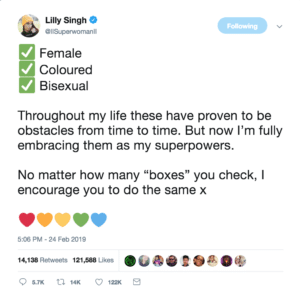 Check out these responses:

What do you think about Lilly’s announcement? Let us know in the comments section.

Mom Causes BACKLASH for Taking Family in an RV to Avoid…