When will people realize that public disturbance pranks aren't funny?
By Megan Grisham

19 year old YouTuber Malik Sanchez, known as “Smooth Sanchez” online, has been arrested for making a bomb threat at a Manhattan restaurant.

The self claimed “involuntary celibate” Youtuber  livestreamed the entire hoax on his YouTube channel on February 13th, which still has the video available to view.

“Allahu Akbar. Allahu Akbar. Bomb detonation in two, in two minutes. I take you with me and I kill all you. I kill all you right now. And I kill all you for Allah. I do it, bomb now, bomb now,” he threatened to the civilians in the restaurant. The video shows customers grabbing their belongings and running out.Sanchez boasts about his attempted prank by exclaiming to his viewers, “Holy shit. Holy shit boys. That was fucking five stars. That was five stars. Holy shit huh?”

Court papers say that Sanchez had left the scene by the time police arrived.

Sanchez was arrested earlier this week for the stunt. A New York judge ordered him to be held without bail and his trial is pending in Manhattan federal court. “As alleged, Malik Sanchez perpetrated a hoax bomb threat at a Manhattan restaurant that frightened innocent victims, sowed chaos, and diverted precious law enforcement resources.  Today’s arrest makes clear that such conduct will not be tolerated,” Manhattan U.S. Attorney Audrey Strauss said in a statement. 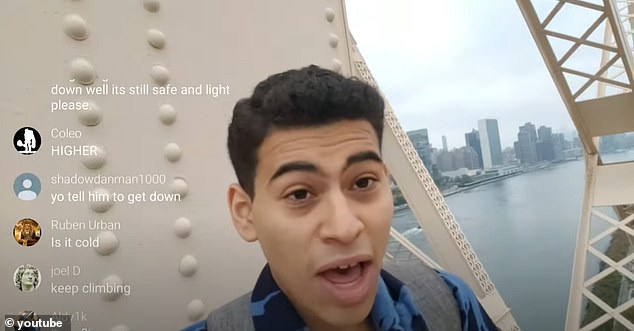 This isn’t the first time that Sanchez has been arrested for stunts on his YouTube channel. Last year he was arrested and faced charges for climbing the Queensboro Bridge while livestreaming, telling police he wanted to go viral. The teen’s YouTube channel also has livestreams of threatening and violent behavior towards women. According to Assistant U.S. Attorney Kaylan Lasky, Sanchez also faces charges for allegedly pepper spraying approximately five people in the past six months.

Regarding the YouTubers most recent arrest, FBI Assistant Director William F. Sweeney Jr stated, “Anyone who intends to carry out a similar hoax should know that the FBI’s JTTF is ready and willing to respond.”