Are you tired of the general public refusing to wear a face mask during a deadly pandemic? Well, YouTuber Allen Pan has created a unique solution to the anti-masker problem. The solution? A gun that will launch and stick a mask to a person’s face.

In the lighthearted 9-minute YouTube video which was published on August 15th and has amassed over 1.7 million views, Pan explains that because there are so many educational videos about the scientific reasons for how masks are safe and effective, but many people still won’t wear one, it is time to take matters into his own hands and create a solution that will force ‘mask-holes’ to wear one. “It feels like people just aren’t wearing masks, and they should be,” Pan said in the video. “What am I going to do about it? If there’s one thing that Coronavirus protesters actually care about, it’s the Second Amendment, and American problems demand American solutions. I’m going to put together the Second Amendment with healthcare. That’s right: Guns and public safety”.

The video continues with Pan building the ‘mask launcher’ and explaining to viewers how the device will work. The mask gun is loaded with a surgical mask fitted with adhesive to make it stick to a person’s face if the 4 projectile weights attached to the sides of the mask don’t properly tangle together around the person’s head after the mask has been launched. 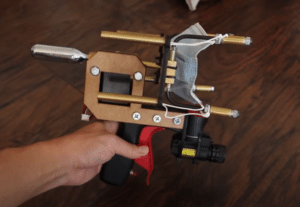 Before Pan tested the mask-gun on the actual public, he first tried it out on a test dummy and himself. Even though a few of the test trials were unsuccessful, Pan eventually had success in securing the mask around the dummy and himself. Once the device was ready for human trials, Pan went to Huntington Beach, California, to search for unsuspecting ‘mask-holes’ to “get shot in the face for public health.”

Fortunately, a majority of beach-goers that day were wearing mask, so Pan instead conducted a voluntary ‘focus-group’ testing for anyone who wanted to test out the mask-gun on a test dummy. When Pan asked volunteers if they “saw someone walking around in Walmart without wearing a mask would you shoot them with this”, they replied with a resounding yes, adding that the mask-gun is ‘priceless’.

What do you think of the mask launcher? Would you use it on a anti-masker? Let us know and follow What’s Trending for more!